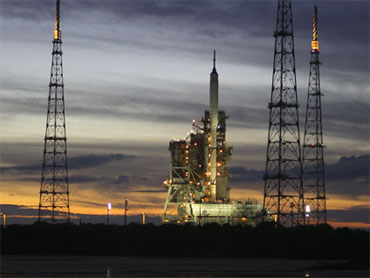 Engineers made final preparations Tuesday morning for the long-awaited launch of NASA's towering Ares I-X rocket - the 33-story centerpiece of a $445 million test flight expected to generate valuable engineering data for development of a post-shuttle replacement.

The planned launch comes on the heels of a report by a presidential panel of space experts that concluded NASA's current plans to build new Ares rockets and establish bases on the moon by the early 2020s is not feasible without an additional $3 billion to $6 billion a year.

The slender Ares I-X, its second stage wider than the first, stands twice as tall as a space shuttle "stack." But its pencil-thin appearance quickly led to a somewhat derisive nickname: the "stick."

A seven-hour countdown began at 1 a.m. Eastern on Tuesday, targeting the opening of a four-hour launch window at 8 a.m.

Forecasters, however, were predicting a 60 percent chance of clouds and rain that could prevent good visibility, needed for precise optical tracking, and cause static charges to build up around the rocket, interfering with communications, including the self-destruct system if needed.

For the first test flight - Ares I-X - NASA is using a standard four-segment shuttle booster with an empty fifth segment, housing guidance and navigation equipment adapted from Lockheed Martin's Atlas 5 rocket, and new 150-foot-diameter parachutes to lower the spent rocket to the ocean for recovery.

A dummy second stage loaded with ballast and topped off with a make-believe Orion capsule and abort rocket are bolted to the top of the first stage.

More than 700 sensors are mounted on the Ares I-X to record an enormous amount of engineering data on all phases of flight, from launch through motor burn out two minutes later, through stage separation, parachute deployment and ocean impact. Multiple video cameras are mounted on the rocket to provide real-time views of critical elements.

"One test is worth a thousand expert opinions," said Jon Cowart, Ares I-X deputy mission manager at the Kennedy Space Center. "It's brand new, it's a long, thin rocket. We want to make sure we can guide this thing. Balance a broomstick on the end of your finger, you'll get some idea of what we're dealing with here."

Said former NASA Administrator Mike Griffin, the man who approved the Ares architecture: "This is a vehicle that, when you look at it, is long and slender. That has caused, quite rightly, of course, at the top level, a lot of concern that it will be difficult to control."

While engineers are confident the slender rocket will, in fact, clear the launch pad service gantry and follow its programmed trajectory, "we're not going to guarantee this is going to work," said Bob Ess, the mission manager.

Added Launch Director Ed Mango: "We wouldn't go if we didn't think the vehicle is going to fly right."

If the weather prevents a launch Tuesday, engineers will recycle for another attempt at 8 a.m. Wednesday, when forecaster expect a 60 percent chance of acceptable weather. NASA does not yet have a third launch date booked with the Air Force Eastern Range, which provides telemetry and tracking support for all rockets launched from Florida. Assuming Thursday is available, forecasters are predicting a 70 percent chance of good weather.

While the current Ares I program was among five options presented to the White House by the expert panel, several members made it clear they believe it would make more sense to scrap the rocket in favor of commercially developed boosters and capsules that could carry U.S. astronauts to and from the International Space Station.

NASA then could concentrate on developing a heavy-lift rocket in support of a so-called "flexible path" architecture that would forego near-term moon landings in favor of manned missions to orbit or fly by the moon or even Mars with possible landings on Martian moons or asteroids. The long-term goal - landings on Mars - would be developed in parallel in a more incremental fashion.

That approach, too, would require additional funding and while many observers believe the Ares I will be abandoned, the Obama administration has not yet announced what changes might be ordered.

"My crystal ball is that Obama will, at least for fiscal 2011, add a billion or so to the NASA budget - the key will be the out-year budget - and endorse something like the flexible path," said John Logsdon, a space policy analyst at George Washington University and a member of the Columbia Accident Investigation Board.

But Leroy Chiao, a former astronaut and member of the U.S. Human Spaceflight Plans Committee chartered by the Obama administration, said in an interview that "it's important to emphasize that we were presenting options, not recommendations."

"Despite what's been going on in the blogosphere, the panel didn't come up and saying (NASA) should cancel Ares I, which a lot of people think we actually did," Chiao said. "As far as the flight test ... there are definitely things to be learned. And I think no matter what, it's certainly worthwhile going forward with the test because frankly, it would probably have cost just as much money to stand down."

In the end, he said, "it's really up to the decision makers as to which path to go down. So Ares I is not dead by a long shot."