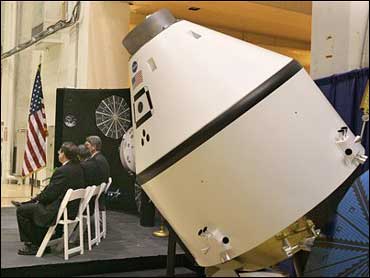 How do you get rid of a dead astronaut's body on a three-year mission to Mars and back?

When should the plug be pulled on a critically ill astronaut who is using up precious oxygen and endangering the rest of the crew? Should NASA employ DNA testing to weed out astronauts who might get a disease on a long flight?

With NASA planning to land on Mars 30 years from now, and with the recent discovery of the most "Earth-like" planet ever seen outside the solar system, the space agency has begun to ponder some of the thorny practical and ethical questions posed by deep space exploration.

Some of these who-gets-thrown-from-the-lifeboat questions are outlined in a NASA document on crew health obtained by The Associated Press through a Freedom of Information Act request.

NASA doctors and scientists, with help from outside bioethicists and medical experts, hope to answer many of these questions over the next several years.

"As you can imagine, it's a thing that people aren't really comfortable talking about," said Dr. Richard Williams, NASA's chief health and medical officer. "We're trying to develop the ethical framework to equip commanders and mission managers to make some of those difficult decisions should they arrive in the future."

One topic that is evidently too hot to handle: How do you cope with sexual desire among healthy young men and women during a mission years long?

Sex is not mentioned in the document and has long been almost a taboo topic at NASA. Williams said the question of sex in space is not a matter of crew health but a behavioral issue that will have to be taken up by others at NASA.

The agency will have to address the matter sooner or later, said Paul Root Wolpe, a bioethicist at the University of Pennsylvania who has advised NASA since 2001.

"There is a decision that is going to have to be made about mixed-sex crews, and there is going to be a lot of debate about it," he said.

The document does spell out some health policies in detail, such as how much radiation astronauts can be exposed to from space travel (No more radiation than the amount that would increase the risk of cancer by 3 percent over the astronaut's career) and the number of hours crew members should work each week (No more than 48 hours).

But on other topics — such as steps for disposing of the dead and cutting off an astronaut's medical care if he or she cannot survive — the document merely says these are issues for which NASA needs a policy.

"There may come a time in which a significant risk of death has to be weighed against mission success," Wolpe said. "The idea that we will always choose a person's well-being over mission success, it sounds good, but it doesn't really turn out to be necessarily the way decisions always will be made."

For now, astronauts and cosmonauts who become critically sick or injured at the international space station — something that has never happened — can leave the orbiting outpost 220 miles above Earth and return home within hours aboard a Russian Soyuz space vehicle.

That would not be possible if a life-and-death situation were to arise on a voyage to Mars, where the nearest hospital is millions of miles away.

Moreover, Mars-bound astronauts will not always be able to rely on instructions from Mission Control, since it would take nearly a half-hour for a question to be asked and an answer to come back via radio.

Astronauts going to the moon and Mars for long periods of time must contend with the basic health risks from space travel, multiplied many times over: radiation, the loss of muscle and bone, and the psychological challenges of isolation.

NASA will consider whether astronauts must undergo preventive surgery, such as an appendectomy, to head off medical emergencies during a mission, and whether astronauts should be required to sign living wills with end-of-life instructions.

The space agency also must decide whether to set age restrictions on the crew, and whether astronauts of reproductive age should be required to bank sperm or eggs because of the risk of genetic mutations from radiation exposure during long trips.

Already, NASA is considering genetic screening in choosing crews on the long-duration missions. That is now prohibited.

"Genetic screening must be approached with caution ... because of limiting employment and career opportunities based on use of genetic information," Williams said.

NASA's three major tragedies resulting in 17 deaths — Apollo 1, Challenger and Columbia — were caused by technical rather than medical problems. NASA never has had to abort a mission because of health problems, though the Soviet Union had three such episodes.

Some believe the U.S. space agency has not adequately prepared for the possibility of death during a mission.

"I don't think they've been great at dealing with this type of thing in the past," said former astronaut Story Musgrave, a six-time space shuttle flier who has a medical degree. "But it's very nice that they're considering it now."