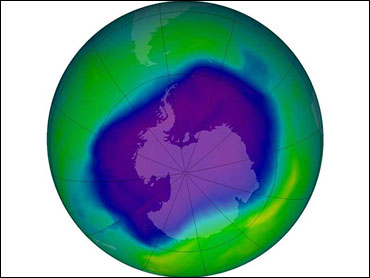 Here's rare good news about an environmental crisis: We dodged disaster with the ozone layer.

A NASA study about ozone-munching chemicals from aerosol sprays and refrigeration used a computer model to play a game of what-if. What if the world 22 years ago didn't agree to cut back on chlorofluorocarbons which cause a seasonal ozone hole to form near the South Pole?

By 2065, two-thirds of the protective ozone layer would have vanished and "the ozone hole covers the Earth." And the CFCs, which are long-lived potent greenhouse gases, would have pushed the world's temperature up an extra 4 degrees.

In mid-latitudes like Washington, DNA-damaging ultraviolet radiation would have increased more than sixfold. Just 5 minutes in the summer sunshine would have caused a sunburn, instead of 15. Typical midsummer UV levels, now around 10 or 11, would have soared to 30. Summer thunderstorms in the Northern Hemisphere would have been much stronger.

"It is a real horrible place," Newman told The Associated Press.

But that dreadful scenario was "a world avoided," according to the paper published this week in the journal Atmospheric Chemistry and Physics.

After scientists raised warnings in the early 1970s - later earning a Nobel Prize - 193 nations agreed in the 1987 treaty called the Montreal Protocol to cut CFC emissions. CFCs had been used in air conditioning, aerosol sprays, foam packaging and other products.

Who owns your files if you use Google Drive?

Newman, the co-chair of the protocol's scientific panel, said the study provides hope that the world can do the same thing on another looming but even harder to solve environmental problem: Global warming.

"There's a huge lesson to be learned here," said Paul Wapner, director of Global Environmental Politics at American University. "In significant cases, human beings can get together and arrive at international or global principles and avoid ecological catastrophe."