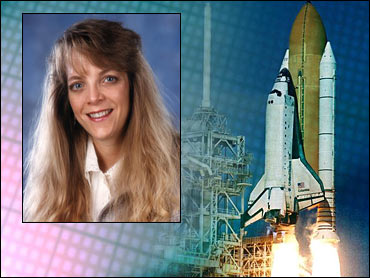 With tears in her eyes, the NASA manager who dismissed the possibility during Columbia's doomed flight that the shuttle had been seriously damaged by foam defended her decisions Tuesday and said no one should be blamed for the tragedy.

"We were all trying to do the right thing. All along, we were basing our decisions on the best information that we had at the time," said Linda Ham, who led Columbia's mission management team.

"Nobody wanted to do any harm to anyone. Obviously, nobody wants to hurt the crew. These people are our friends. They're our neighbors. We run with them, work out in the gym with them. My husband is an astronaut. I don't believe anyone is at fault for this."

In her first public appearance since the space shuttle disaster nearly six months ago, Ham acknowledged that with 20-20 hindsight, there are things the mission management team and all of NASA could have done better.

She said she did not seek spy satellite pictures of the orbiting spaceship because even though engineers wanted pictures, none of them approached her about it during the 16-day flight and she could not ascertain who was making the request.

She talked to a Kennedy Space Center official who was aware of a possible request for spy satellite imagery and told him: "I really can't find the source, so I don't think we need to pursue this."

"It ended that day," she said. "It never came up again. Never. Not in a hallway, not in the mission management team."

Ham said she takes responsibility for that decision, as the head of the mission management team. "But we are a team. We all heard the discussions," she said. "None of us felt that the analysis (of the danger posed by the blow from the foam) was faulty."

It wasn't until after the accident that she learned some of the engineers who wanted the spy satellite pictures had taken part in her meetings, but never spoke up.

Ham had to stop talking at one point in the news briefing. She struggled to hold back tears and bit her lips, but the tears came anyway and she wiped them away with a borrowed handkerchief.

She and two other top NASA officials at Johnson Space Center met with reporters on Tuesday several hours after NASA released the full transcripts of all five mission management meetings held during Columbia's flight.

During the second meeting, on Jan. 21, five days after Columbia's launch, Ham received a short briefing on the 1½-pound chunk of fuel-tank foam insulation that slammed into Columbia's left wing during liftoff.

"Really, I don't think there is much we can do," she told her colleagues. "It's not really a factor during the flight because there isn't much we can do about it."

Referring to a foam strike two flights earlier, during Atlantis' launch in October, Ham said at the management team meeting, "I'm not sure if the area is exactly the same where the foam came from that, but the material properties and density of the foam wouldn't do any damage."

The independent Columbia Accident Investigation Board has since ascertained that the foam almost certainly created a 6- to 10-inch hole in the vulnerable leading edge of Columbia's left wing, allowing hot gases to enter the spaceship during re-entry on Feb. 1. The shuttle broke apart over Texas 16 minutes short of its Florida homecoming. All seven astronauts were killed.

Unknown to the mission management team at the time, it was the largest piece of foam insulation to ever strike a shuttle. The estimated impact speed was more than 500 mph.

The chairman of the investigation board, retired Navy Adm. Harold Gehman Jr., said in May that NASA could have launched Atlantis to rescue the Columbia astronauts if the space agency had known early in the flight about the severity of the wing damage. And just this month, he said NASA management failure will share equal blame with the foam strike in the panel's final report, to be released at the end of August.

Both Ham and Phil Engelauf, the mission operations representative on the management team, said they would have tried everything to save the astronauts, if they had known the damage to the wing was catastrophic.

The foam impact was considered so trivial by managers, in fact, that Columbia's astronauts were not informed about it until a week into their flight. Mission Control sent up a 16-second video clip of the foam strike "just so they are armed if they get any questions in the press conferences," Engelauf told the mission management team on Jan. 24.

On Tuesday, Engelauf said he probably would not have notified the crew about the foam strike at all if reporters had not asked NASA about it. He did not want the astronauts worrying about what he and other managers considered "a non-issue."