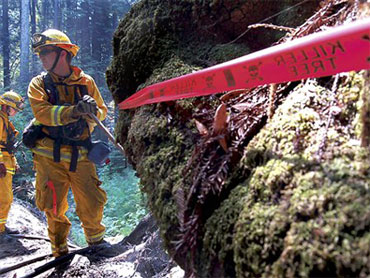 NASA may not have time to fix all its management problems before space shuttle flights resume next year, according to the leader of a panel monitoring how the space agency responds to the upcoming report on the Columbia disaster.

Richard Covey, a senior executive with Boeing, also said he was disappointed at what he felt was a lapse in safety procedures implemented after the 1986 Challenger disaster.

The independent Columbia Accident Investigation Board will soon release its report on the shuttle accident, in which all seven crewmembers died.

The board is expected to blame to tragedy on a piece of foam that broke off the external fuel tank on liftoff, striking the shuttle's wing and damaging plates that protect the craft from the intense heat encountered when re-entering Earth's atmosphere. Columbia broke up on its descent.

Covey, a former astronaut who piloted the first post-Challenger mission, also told reporters there were similarities between the Feb. 1 break-up of the Columbia and the Challenger's demise, reports CBS News space consultant William Harwood.

Covey said "what I have learned of the process that maybe allowed the situation to develop where we had the accident…was disappointing to me. It has similarities to the Challenger accident, but not perfectly."

He said indications from earlier flights of problems with the foam insulation were treated the same way NASA dealt with worries about the O-rings that failed in the Challenger accident.

That report is expected to call for substantial changes in the way NASA manages shuttle missions, after evidence of a breakdown in internal communications during Columbia's final flight, as well as other problems.

NASA hopes to launch the shuttle Atlantis on mission STS-114 as early as March 11. Covey said NASA may not have time to make the management changes by them, which will make it hard for his panel to evaluate the agency's performance.

"Because they may not be expected to be implemented before return to flight, then that puts us in a situation where we have to say well, 'What can we assess in the time period that we're chartered to do assessments?'" he said.

"So our approach may be to look at plans, strategies or approaches that may be in place prior to the first flight and do an assessment. But it would not be a complete assessment because the real implementation may take longer," he said.

NASA's agency's deputy administrator said Tuesday that the agency will not challenge any of the recommendations to be issued by the investigation board.

However, deputy administrator Fred Gregory and two other NASA officials were unwilling to talk publicly about what is likely to be the board's most far-reaching recommendation: changing NASA's culture.

"There will be no attempt whatsoever to argue or defend a recommendation from the CAIB," Gregory said. "The board has not published the report yet and I may have to back off a little bit…but my assumption is that we would follow to the letter the recommendations."

Board members and former NASA employees have pointed to attitudes of superiority, fear of retribution by lower-level employees, communications problems and strained relationships between key divisions of NASA as part of its difficult culture.

Gregory said he couldn't talk about plans to change that until after the investigation board issues its final report.

"It would be difficult for me to define to you what the NASA culture is," Gregory said. "As I sit here, I have three astronauts here. I suspect that if you try to determine what the culture of the three of us is, you would find that there are three different cultures here."