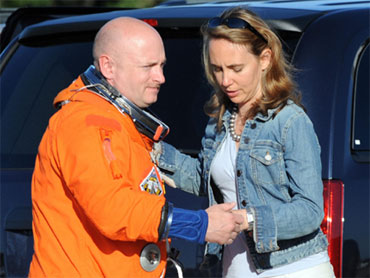 As Congresswoman Gabrielle Giffords continues her recovery in a Houston hospital from the gunshot wound she suffered in an assassination attempt, her husband is going ahead with his space shuttle flight mission in April.

"I am looking forward to rejoining my STS-134 crew members and finishing our training for the mission," Kelly said in a statement. "We have been preparing for more than 18 months … I appreciate the confidence that my NASA management has in me and the rest of my space shuttle crew."

CBS News National Correspondent Ben Tracy observed on "The Early Show" Friday that whether or not to leave the planet was a tough choice for a man who has seldom left his wife's hospital room and has often been pictured holding his wife's hand.

Kelly has told reporters, "The last month has been the hardest of my life and the hardest time of my family's life."

On that fateful day in Tucson, Kelly was in Houston training for the mission. Giffords presently is doing her rehabilitation in Houston in part because it is close to the Johnson Space Center.

"As many of you know I'm an astronaut," Kelly told reporters. "I have been fortunate on three separate occasions in my life to look down at this planet from space."

NASA is likely scrapping the shuttle program, meaning this may be Kelly's last chance to go into space.

Sen. Bill Nelson (Dm Fla.) said, "Well, you know if Gabby had the decision to make, she would tell her husband, 'Go ahead and go fly." '

After seeing first-hand how violent life on earth can be, Tracy noted, Kelly seems to long for a better view. He has said, "You have an entirely different perspective of life on our planet."

The website Politico.com was first to report that Kelly will opt to fly on the mission.