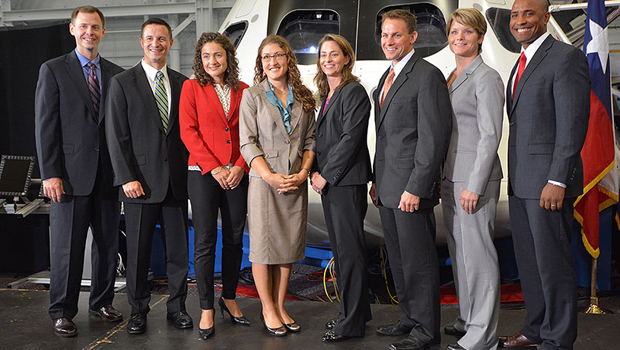 "Their journey begins now, and the nation, as it always has, will be right beside them, reaching for the stars," said NASA Administrator Charlie Bolden, a former shuttle commander. "Congratulations to all of you. Welcome, and have fun."

The astronaut candidates, or "ascans," were selected from more than 6,100 applications, the second-largest pool of applicants in NASA history. Of that total, 120 were invited to the Johnson Space Center for initial interviews and medical exams.

Forty nine of those were asked to come back for follow-on interviews and more detailed physical exams. The eight men and women eventually selected reported to the Johnson Space Center last week to begin training.

Asked to describe the interview and selection process, Navy Lt. Cmdr. Victor Glover, a 37-year-old F/A-18 jet pilot with multiple advanced degrees, said "there was a lot of writing involved."

"The one that stands out the most is we were asked to compose a tweet, a limerick or a haiku," he said. "And I did a limerick, and it goes:

"Eyes fixed, gazing off into space

"My mind in awe of the human race

"This is all dizzying to me

"Because I gave so much blood and pee;

"Happy to be here (at) the colonoscopy place.

"And that's funny if you had to go through this interview process, specifically the medical portion," he joked.

Josh A. Cassada, a 39-year old physicist and Navy test pilot with more than 2,400 hours flying time and a doctorate in high-energy particle physics.

Air Force Lt. Col. Tyler (Nick) Hague, 37, a U.S. Air Force Academy graduate who earned a master's in aeronautics and astronautics from the Massachusetts Institute of Technology and is a graduate of the U.S. Air Force Test Pilot School.

Marine Maj. Nicole Aunapu Mann, 35, a graduate of the U.S. Naval Academy, Stanford University and the U.S. Naval Test Pilot School. She is an F/A-18 pilot with more than 1,400 hours flight time and a master's in mechanical engineering.

Jessica U. Meir, 35, with a doctorate in marine biology from the Scripps Institution of Oceanography. She was serving as an assistant professor of anesthesia at Harvard Medical School when selected by NASA.

Army Maj. Andrew R. Morgan, 37, a graduate of The U.S. Military Academy at West Point with a doctorate in medicine and more than 380 parachute jumps with the Army's Black Knights sky diving team.

"Something that amazed me when we got here was that all of us come from such different backgrounds," McClain said. "We've just really taken the time to get to know each other and understand what our mission's going to be.

"It's extremely humbling to look around the astronaut office, see how much experience there is, see how many lessons there are to learn and it's truly starting at square one. ... Now our biggest responsibility is to learn from all these people around us, from years and years of history at NASA, so that when that baton does get passed to us we're ready to move forward."

McClain and her fellow candidates will spend about two years learning the ins and outs of space station operations, gaining experience in NASA's T-38 jet trainers and visiting NASA field centers to get grounded in the agency's background and capabilities.

They eventually will support crews aboard the space station before becoming eligible for their own flight assignments.

Jupiter may be to thank for life on Earth
William Harwood