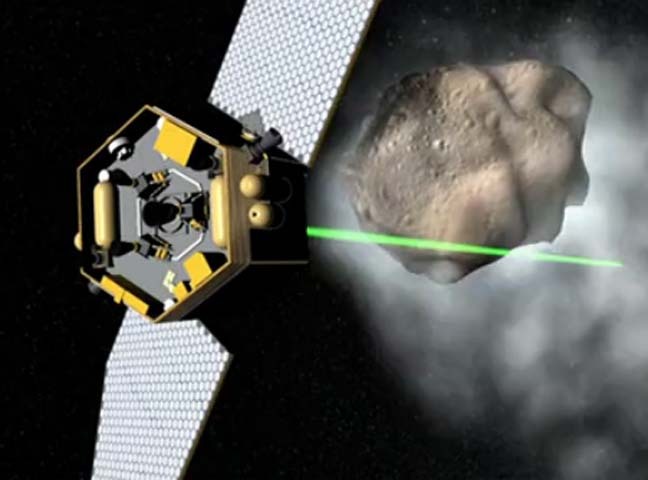 The concept of tractor beams grabbing spaceships and meteors remains an exotic idea right out of "Star Track." But NASA is starting more modestly, investing $100,000 into a project to test whether lasers can be used on robotic space missions to capture stardust.

Researchers at NASA's Goddard Space Flight Center will three possible ways to control particles with laser beams. The idea would be to give robotic rovers and orbiters the ability to gather samples a way to collect passing particles.

"Though a mainstay in science fiction, and Star Trek in particular, laser-based trapping isn't fanciful or beyond current technological know-how," Paul Stysley, a laser engineer at the NASA Goddard Space Flight Center in Greenbelt, Md. said.

"The original thought was that we could use tractor beams for cleaning up orbital debris," Stysley added. "But to pull something that huge would be almost impossible -- at least now. That's when it bubbled up that perhaps we could use the same approach for sample collection."

NASA has gathered space samples in more mundane fashion. For instance, the Stardust spacecraft used aerogel to collect dust as it passed by comet Wild 2. On Mars, the rover Curiosity is going to drill and scoop samples from the Red Planet's surface. But the cost to NASA for both techniques is relatively dear, Stysley noted. What's more, they are limited by range and sample rate.

"An optical-trapping system, on the other hand, could grab desired molecules from the upper atmosphere on an orbiting spacecraft or trap them from the ground or lower atmosphere from a lander," he said. "In other words, they could continuously and remotely capture particles over a longer period of time, which would enhance science goals and reduce mission risk."

Two types of beams in particular are being studied: solenoid beams and Bessel beams. Lab tests carried out with the former have already reported some success while the pulling power of the latter still awaits experimental verification. The third option is to make use of an effect described as an "optical tweezers" where objects get trapped in the laser beams.