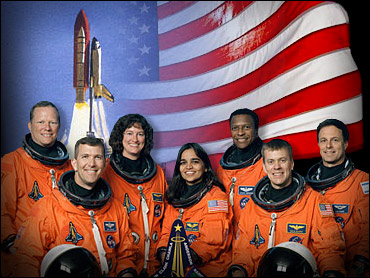 NASA observed a moment of silence across the country and in orbit Thursday in memory of the 17 astronauts killed in America's three spacecraft tragedies.

"NASA remembers our heroes," the space agency said on its Internet site against a black backdrop, flashing photos of the Apollo 1, Challenger and Columbia crews.

Aboard the international space station, commander Leroy Chiao asked colleagues in Mission Control to pause with him to "honor our fallen."

A year ago, NASA Administrator Sean O'Keefe declared that the last Thursday of every January would be a Day of Remembrance. NASA's "three darkest hours," as O'Keefe put it Thursday, took place around this time of year: the Apollo 1 fire during a countdown test at the launch pad on Jan. 27, 1967; the Challenger launch accident on Jan. 28, 1986; and the Columbia re-entry disaster on Feb. 1, 2003.

Three astronauts died inside the Apollo 1 spacecraft, seven aboard Challenger and seven more aboard Columbia.

"We tripped in Apollo. We've tripped since then," retired Apollo and shuttle astronaut Thomas Mattingly said during a ceremony at NASA headquarters in Washington.

Why some parents are banning "smart toys" this Christmas

At Florida's Kennedy Space Center, a moment of silence was observed at noon and flags flew at half staff.

At Johnson Space Center in Houston, employees gathered outside to watch four training jets perform the missing-man formation and to listen to bells tolling three times - once for each spacecraft accident.

And at the ceremony in Washington, NASA Deputy Administrator Frederick Gregory choked up as he recalled the Challenger crew. A former space shuttle commander who is now NASA's No. 2 man, Gregory was in Mission Control the morning Challenger blew up.

"It is still painful to think about those moments when we lost contact with the crew and our worst fears were realized. It was my intent that day at that moment to press the transmit button as I saw the Challenger break up and say, `Godspeed, Challenger.' I didn't - and I should have," Gregory said, hitting the lectern with his hand.

"While we can't bring back our astronaut heroes, we're now obliged to constantly learn and act on the lessons of our tragedies," he said.

Also remembered Thursday were the three NASA Jet Propulsion Laboratory employees killed on their way to work in December in a commuter van accident in Southern California.