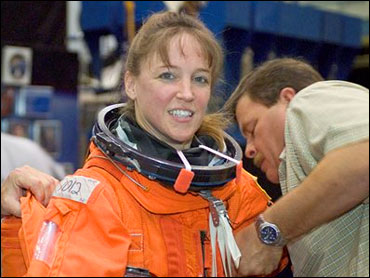 What would happen if an astronaut came unglued in space and, say, destroyed the ship's oxygen system or tried to open the hatch and kill everyone aboard?

That was the question on some minds after the apparent breakdown of Lisa Nowak, arrested in Orlando, Fla., this month on charges she tried to kidnap and kill a woman she regarded as her rival for another astronaut's affections.

It turns out NASA has a detailed set of written procedures for dealing with a suicidal or psychotic astronaut in space. The documents, obtained this week by The Associated Press, say the astronaut's crewmates should bind his wrists and ankles with duct tape, tie him down with a bungee cord and inject him with tranquilizers if necessary.

"Talk with the patient while you are restraining him," the instructions say. "Explain what you are doing, and that you are using a restraint to ensure that he is safe."

The instructions do not spell out what happens after that. But NASA spokesman James Hartsfield said the space agency, a flight surgeon on the ground and the commander in space would decide on a case-by-case basis whether to abort the flight, in the case of the shuttle, or send the unhinged astronaut home, if the episode took place on the international space station.

The crew members might have to rely in large part on brute strength to subdue an out-of-control astronaut, since there are no weapons on the space station or the shuttle. A gun would be out of the question; a bullet could pierce a spaceship and could kill everyone. There are no stun guns on hand either.

"NASA has determined that there is no need for weapons at the space station," Hartsfield said.

NASA and its Russian counterpart drew up the checklist for the space station in 2001. Hartsfield said NASA has a nearly identical set of procedures for the shuttle, but he would not provide a copy Friday, saying its release had not yet been cleared by the space agency's lawyers.

The space-station checklist is part of a 1,051-page document that contains instructions for dealing with every possible medical situation in space, including removing a tooth. Handling behavioral emergencies takes up five pages.

The military has a similar protocol for restraining or confining violent, mentally unstable crew members who pose a threat to themselves or others in nuclear submarines or other dangerous settings.

Although Nowak performed her duties with aplomb during a short visit to the space station via the shuttle last July and was not scheduled to fly again, her arrest has led NASA to review its psychological screening process.

A mentally unstable astronaut could cause all kinds of havoc that could endanger the three crew members aboard the space station or the six or seven who typically fly aboard the shuttle.

The checklist says say astronauts who crack up can be restrained and then offered oral Haldol, an anti-psychotic drug used to treat agitation and mania, and Valium. If the astronaut won't cooperate, the drugs can be forcibly given with a shot to the arm. Crew members are instructed to stay with the tied-up astronaut to monitor vital signs.

Space station astronauts talk weekly via long-distance hook-up to a flight surgeon and every two weeks to a psychologist, so any psychiatric disorder would probably be detected before it became so serious that the astronaut had to be brought home, Hartsfield said.

Depression, feelings of isolation and stress are not unheard of during long stays in space in tight quarters.

A couple of Soviet crews in past decades are believed to have experienced psychological problems, and U.S. astronaut John Blaha admitted feeling depressed at the start of a four-month stay at the Soviets' Mir space station more than a decade ago. Antidepressants were not available.

"I think you have to battle yourself and tell yourself, `Look, this is your new planet ... and you need to enjoy this environment,"' Blaha told the AP last week. "You sort of shift yourself mentally."

During missions in 1985 and 1995, shuttle commanders put padlocks on the spaceships' hatches as a precaution since they didn't know the scientists aboard very well. Some crew members, called payload specialists, are picked to fly for specific scientific or commercial tasks and do not train as extensively with the other astronauts.

Would-be astronauts are carefully tested and screened to eliminate those who are unstable. But unless they are bound for the space station for a monthslong stay in orbit, they are not put through any regular psychological tests after that.

Astronauts selected for the space station get a psychiatric assessment six months and a month before launch.

Dr. Patricia Santy, a former NASA psychiatrist and author of the book "Choosing the Right Stuff," said there are no good studies of astronauts' stress levels or how they adapt psychologically to space.

U.S. astronauts at the space station keep a journal for a study by a Santa Barbara, Calif., researcher. But Santy said the diaries won't help detect mental illness.

"What astronaut is going to tell you they're feeling homicidal?" she asked. "They're very conscious that if they say the wrong thing they could get grounded."

Astronaut James Reilly, who is flying on space shuttle Atlantis next March, said it is unlikely a U.S. astronaut would lose it in space. Space tourists who pay the Russians $20 million to go to the space station are another matter, he said.

"I think we stand a greater chance of someone getting a little nuts with the space tourists that fly occasionally because it's less rigorous," Reilly said.