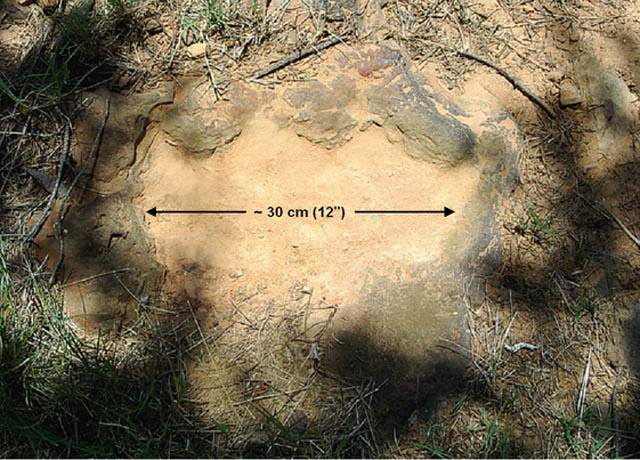 (LiveScience) At NASA's Goddard Space Flight Center in Maryland, some of the most brilliant minds in the world work to build the spacecraft that humans use to explore their universe. But where space scientists now roam, dinosaurs used to call home, according to dino-hunter Ray Stanford.

Stanford has discovered the footprint of a lumbering, spiny dinosaur called a nodosaur in NASA's own backyard on the Goddard Space Flight Center campus. NASA officials aren't disclosing the precise location of the print, fearing that someone might damage or try to remove the fossilized track.

The dinner-plate-sized footprint bears the mark of four dino toes. It belongs to a nodosaur, a tank-like, armored beast studded with bony protuberances that roamed the area about 110 million years ago during the Cretaceous period, which lasted from about 125 million to 65 million years ago. Nodosaurs were plant-eaters, and this one appeared to be moving quickly across the Cretaceous mud, as its heel did not sink deeply into the ground. [See Images of the Ancient Dino-Print]

Stanford, an amateur paleontologist who has had several papers published, confirmed his find with Johns Hopkins University dinosaur expert David Weishampel. On Aug. 17, Stanford shared the location of the find with Goddard officials and with Washington Post reporter Brian Vastag, who made the discovery public the same day.

"Space scientists may walk along here, and they're walking exactly where this big, bungling heavy-armored dinosaur walked, maybe 110 to 112-million years ago," Stanford told Goddard officials.

Maryland is no spring chicken when it comes to dinosaur fossils; in fact, the corridor between Washington, D.C., and Baltimore, Md., is known as "Dinosaur Alley," because so many of the beasts' fossils were discovered during iron mining in the 18th and 19th centuries, according to Weishampel. "Today, Maryland remains the only source of Early Cretaceous dinosaur fossils on the East Coast," he wrote in a 1996 article for Johns Hopkins University magazine.