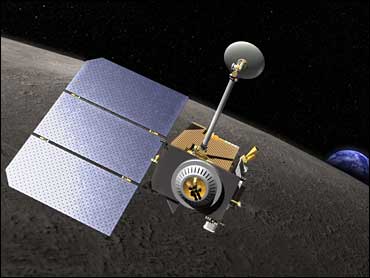 NASA has delayed the launch of an unmanned spacecraft to the moon to scout for potential landing sites for astronauts.

The moon craft is the first step in NASA's program to send astronauts back to the moon and beyond. The Lunar Reconnaissance Orbiter was supposed to blast off from Cape Canaveral, Fla., in early December aboard an Atlas V rocket. But the launch was pushed back after NASA agreed to swap with the Air Force, which will fly a prototype space drone.

"When we looked at the trade-offs ... it seemed like a wise thing to do," he said this week.

NASA officials insist they could have met the original target. The delay will cost the space agency up to $7 million a month. Hautaluoma said the extra costs were built into the program's reserves.

The swap means NASA will miss the Bush administration's stated goal of exploring the moon with a robotic spacecraft by 2008. NASA plans to land astronauts on the moon by 2020.

According to NASA, the rocket's maker, United Launch Alliance, approached the space agency about switching launch dates with the Air Force, which was prepared to fly its X-37B reusable unmanned satellite.

"It was tested and proven ready to go," said Air Force spokesman Lt. Col. Mark Brown. "We were able to jump ahead."

NASA's $491 million lunar craft is designed to circle the moon's poles for at least a year, using its instruments to map the craggy surface and search for safe landing sites to send a manned crew.

Piggybacking on the mission is a $79 million impactor probe managed by NASA's Ames Research Center that will deliberately crash into one of the poles to look for signs of water ice.

The lunar probe's project manager, Craig Tooley of NASA's Goddard Space Flight Center, said his team welcomed "a little more breathing room, but there was also a fair amount of disappointment" about the delay.