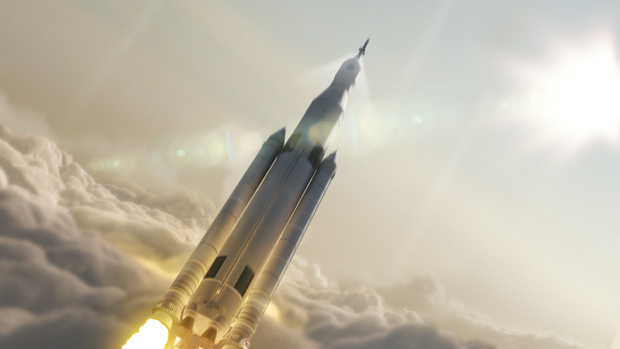 After a detailed engineering and cost analysis, NASA managers have formally approved development of the Space Launch System -- SLS -- heavy-lift rocket, the most powerful booster ever attempted and a key element in the agency's long-range plans to send astronauts to nearby asteroids and, eventually, Mars, officials announced Wednesday.

The SLS development program is projected to cost $7 billion from February 2014 through the rocket's maiden flight, a November 2018 test launch carrying an uncrewed Orion multi-purpose crew vehicle, or MPCV, on a three-week-long shakedown mission beyond the moon and back to an ocean-splashdown on Earth.

That target date is a year later than originally envisioned when NASA first laid out a tentative schedule for initial SLS flights. But senior agency managers say the projected cost and launch target are what came out of a detail analysis incorporating a wide variety of factors, including the possibility of unforeseen engineering challenges.

When all of those factors were included, along with input from an independent review panel, computer analysis indicated a 70 percent chance of meeting the November 2018 target date. That was the goal in a "best practices" approach to program management.

"If we don't do anything, we basically have a 70 percent chance of getting to that date," said Bill Gerstenmaier, NASA's associate administrator for space operations. "Our intent is to go look at those (expected) problems and see what we can do to mitigate (them)."

The initial version of the SLS rocket, powered by four left-over space shuttle main engines and two upgraded shuttle-heritage solid-fuel boosters, will be capable of lifting payloads weighing up to 70 metric tons while generating 8.4 million pounds of thrust -- 10 percent more than the fabled Saturn 5 moon rocket that has long held the record as the world's most powerful launcher.

In its most powerful version, one utilizing advanced strap-on boosters and a high-energy upper stage, the SLS will be able to lift 130 metric tons while generating a staggering 9.2 million pounds of thrust.

"It's also important to remember that we're building a series of launch vehicles here, not just one," Associate Administrator Robert Lightfoot told reporters. "This is for us the start of kind of a production model of how we're going to develop the vehicles we need to take folks beyond low-Earth orbit, moving from a 70-metric-ton vehicle for (the first test flight) to eventually a 130-metric ton rocket that will carry folks to Mars."

But as of today, the only actual missions that are covered by NASA's projected budget are three test flights: the December launch of an uncrewed Orion capsule atop a Delta 4 rocket; the first SLS test flight in 2018; and the first crewed test flight around 2021.

While the rockets are considered essential to deep space exploration missions like a proposed asteroid visit and eventual flights to Mars, no such missions are currently funded or even in detailed planning.

Critics have questioned the low projected flight rate of the new rocket -- one launch every two years or so -- and the wisdom of designing an expensive, heavy-lift rocket before the technical requirements of its eventual missions have been specified.

But NASA managers say the heavy-lift rocket is needed for any voyages to deep space targets and they believe the program is sustainable over the long haul.

The decision to proceed with development of the new rocket came after a review known as Key Decision Point C, "which provides a development cost baseline for the 70-metric ton version of the SLS of $7.021 billion from February 2014 through the first launch and a launch readiness schedule based on an initial SLS flight no later than November 2018," NASA said in a statement.

Lightfoot said in the statement that "we owe it to the American taxpayers to get it right."

"After rigorous review, we're committing today to a funding level and readiness date that will keep us on track to sending humans to Mars in the 2030s -- and we're going to stand behind that commitment," he said.

Gerstenmaier said it had taken engineers three years to reach the development milestone and promised the rocket "will be ready no later than November 2018."

The initial SLS variant will be equipped with an interim upper stage based on one used by United Launch Alliance's Delta 4 rocket.

The first SLS launch in 2018, known as Exploration Mission 1, will send an uncrewed Orion capsule into a stable orbit beyond the moon and then "bring it back to Earth to demonstrate the integrated system performance of the SLS rocket and Orion spacecraft's re-entry and landing prior to a crewed flight," NASA said in a fact sheet.

The second SLS flight -- Exploration Mission 2 -- will be a crewed voyage carrying four astronauts beyond low-Earth orbit for the first time since the Apollo program.

The more powerful variant of the SLS will stand 384 feet tall, weight 6.5 million pounds and generate 9.2 million pounds of thrust at liftoff. Using the same Boeing-built core stage as the less powerful version, the mega rocket will be equipped with advanced, more-powerful strap on boosters and a high energy upper stage possibly using modified J-2X engines based on designs originally developed for the second and third stages of the Saturn 5.

NASA currently has 16 shuttle main engines in storage, enough for four SLS flights. Beyond that, NASA will have to restart the RS-25 production line. The SLS rockets will be built at the Michoud Assembly Facility in New Orleans.

The decision to proceed with development of the SLS follows more than a decade of national debate, uncertain politics and shifting national priorities dating back to the 2003 Columbia disaster.

In the wake of the shuttle's destruction, the Bush administration ordered NASA to complete the International Space Station and retire the shuttle fleet by the end of the decade and to focus instead on building new rockets and spacecraft for a return to the moon in the early 2020s. Antarctica-style moon bases were envisioned, serving as a stepping stone to eventual flights to Mars.

But the Obama administration ultimately concluded NASA's Constellation moon program was over budget and unsustainable and ordered a dramatic change of course, implementing a two-pronged human space policy.

For routine ferry flights carrying astronaut to and from the International Space Station, NASA was told to encourage development of space taxis operated by one or more private companies on a commercial basis. NASA plans to award development contracts in the next few weeks, with initial government-sponsored flights to the station expected in late 2017.

At the same time, the agency was told to plan long-range exploration missions using its own spacecraft to visit an asteroid in the mid 2020s with a flight to at least orbit Mars in the mid 2030s. More recently, the administration specified an asteroid retrieval mission to robotically haul a small space rock back to the vicinity of the moon for hands-on study.

NASA retained the Constellation program's Orion capsule for deep space exploration, but the administration did not initially endorse designing a new heavy lift rocket. After intense pressure from space advocates on Capitol Hill, however, NASA was given the go-ahead to begin planning for a new booster. The SLS was the result.