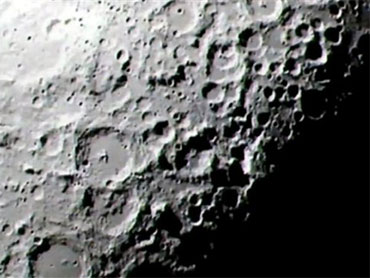 When NASA blasted a hole in the moon last year in search of water, scientists figured there would be a splash. They just didn't know how big.

Now new results from the Hollywood-esque moonshot reveal lots of water in a crater where the sun never shines - 41 gallons of ice and vapor.

That may not sound like much - it's what a typical washing machine uses for a load - but it's almost twice as much as researchers had initially measured and more than they ever expected to find.

The estimate represents only what scientists can see from the debris plume that was kicked up from the high-speed crash near the south pole by a NASA spacecraft on Oct. 9, 2009.

Mission chief scientist Anthony Colaprete of the NASA Ames Research Center calculates there could be 1 billion gallons of water in the crater that was hit - enough to fill 1,500 Olympic-sized swimming pools.

"Where we impacted was quite wet," Colaprete said, adding there could be more such craters at both the moon's poles.

Proof that the moon is dynamic and not a dry, desolate world offers hope for a possible future astronaut outpost where water on site could be used for drinking or making rocket fuel.

But the scientists' excitement is tempered by the political reality that there's no plan to land on the moon anytime soon.

The $79 million moon mission known as the Lunar Crater Observation and Sensing Satellite, or LCROSS, was launched to determine whether water exists at the moon's poles. Previous spacecraft spied hints of possible ice in polar craters.

The mission involved slamming a spent rocket into Cabeus crater. The crash carved a hole about one quarter the size of a football field.

A trailing spacecraft then flew through the cloud of debris and dust thrown up by the impact and used its instruments to analyze what was inside before it also struck the moon.

Besides water, the plume also contained carbon monoxide, carbon dioxide, ammonia, sodium, mercury and silver. The findings were published in Friday's issue of the journal Science.

How the soup of compounds became trapped in Cabeus crater, among the coldest places in the solar system, is unclear. One theory is that they came from comets and asteroids, which pounded the lunar surface billions of years ago, and later drifted to the poles.

Mission scientist Kurt Retherford of the Southwest Research Institute in San Antonio, Texas, thinks the discovery of mercury could pose a challenge for any human settlers because of its toxicity.

But Colaprete, the mission chief scientist, said there are ways around the mercury dilemma.

"Just like we use filters on Earth to make sure our drinking water is clean, we will do the same on the moon. We can distill or purify it," he said.

Apollo astronauts previously found traces of silver and gold in lunar samples facing the Earth. Specks of silver in the frigid polar crater are "not going to start the next `silver rush' to the moon," said planetary geologist Peter Schultz of Brown University, who analyzed the plume.

While scientists celebrated the copious data returned to Earth, the highly hyped mission last year was a public relations bomb. Scores of space fans who stayed up all night to glimpse NASA's promised debris plume through webcast or telescopes saw little more than a fuzzy white flash.

LCROSS was originally hatched as a robotic mission before a future human trip. That was before Congress approved a blueprint last month for NASA that shifts the focus from a manned moon landing - as outlined under President George W. Bush - in favor of sending astronauts to near-Earth asteroids and eventually Mars. A return to the moon could potentially be a way station - something still to be decided - but the moon won't be an overall goal.

Given the recent water find, "it's disappointing that we're not going to forge ahead" with a moon return next decade, said space scientist Greg Delory of the University of California, Berkeley, who was not involved in the project.

But he believes that "when the time is right, we're going to send people there again."