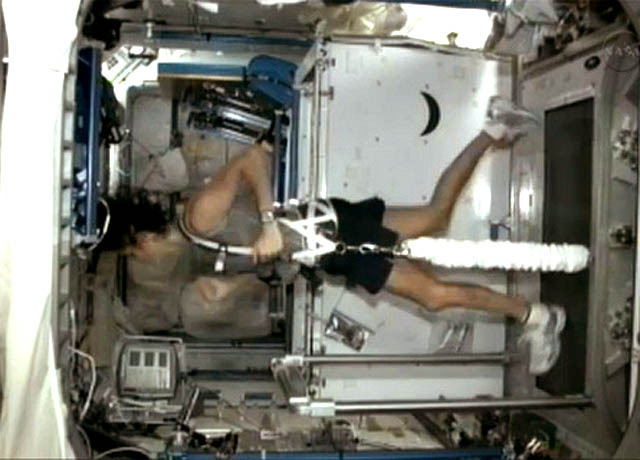 (SPACE.com) NASA astronaut Sunita Williams has completed the first triathlon in space, running, biking and "swimming" along with athletes in the Nautica Malibu Triathlon held in Southern California over the weekend.

"I'm happy to be done," Williams said from the International Space Station Sunday (Sept. 16) after she crossed the orbital finish line. "It wasn't easy, and I'm sure everybody in California's very happy to be done too."

Sunita Williams is the U.S. commander of the Expedition 33 crew aboard the space station, which is orbiting Earth about 240 miles overhead. She used exercise equipment, including a stationary bike, treadmill and strength-training machine specially formulated for weightlessness, to simulate the triathlon experience in space.

After "swimming" half a mile, biking 18 miles, and running 4 miles, Williams finished with a time of one hour, 48 minutes and 33 seconds, she reported. [Astronaut Runs Triathlon In Space | Video]

The space station has its own treadmill and stationary bike, which use harnesses and straps in place of gravity to keep astronauts from floating away. To simulate the swimming portion of the race, Williams used what's called the Advanced Resistive Exercise Device (ARED) to do weightlifting and resistance exercises that approximate swimming in microgravity.

"It's critically important to understand human physiology and how to keep you strong on orbit," NASA's flight director in Mission Control said after Williams completed the triathlon, congratulating her on a race "well done."

Exercise is mandatory for all astronauts, because without it spaceflyers' muscles and bones would deteriorate in weightlessness.

"A big shout out to our astronaut strength and conditioning folks, who were really interested in this and who got this whole workout together," Williams said after her race, adding thanks to the staff of NASA's Exercise Lab as well as neurosurgeon Sanjay Gupta, CNN's medical correspondent, who trained with Williams before her launch and completed the race in Malibu.

"Thanks everybody for your support and ideas about health and fitness and how important it is for humans and getting us back into long-duration spaceflight," Williams said.

An avid athlete, Williams began training for the triathlon before she launched to the space station July 14. After arriving in space, she virtually ran the Aug. 12 Falmouth Road Race, a seven-mile race run in Falmouth, Mass., as part of her training regimen for the triathlon.

The triathlon wasn't her first orbital athletic achievement. During her last stint on the orbiting outpost in 2007, Williams ran the Boston Marathon on the space treadmill, finishing in four hours, 23 minutes and 10 seconds.

Williams is one of three people living and working on the space station right now. Her Expedition 33 crewmates Yuri Malenchenko of Russia and Akihiko Hoshide of Japan arrived with her in July, and the three will return home together in November.