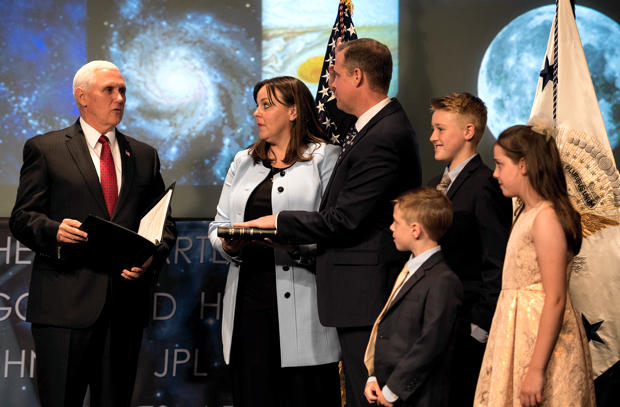 Oklahoma Republican Rep. Jim Bridenstine resigned from the House of Representatives Monday and was sworn in as NASA's 13th administrator by Vice President Mike Pence, chairman of the recently revitalized National Space Council.

"Last December, President Trump ... signed the first set of National Space Council recommendations under Space Policy Directive 1," Pence said during a brief ceremony at NASA Headquarters in Washington. "We will send American astronauts back to the moon, and after that we will establish the capacity, with international and commercial partners, to send Americans to Mars," he said. "And NASA will lead the way."

He praised Bridenstine and said he and the president are "absolutely confident" the new administrator will bring his military, government and civic experience to bear, "along with your character, on a new chapter of renewed American leadership in space."

Bridenstine, with his wife and three children looking on, said he looked forward to implementing President Trump's national space policy, which calls for ending full government support for the International Space Station in 2025, continuing development of commercial crew ships and focusing on returning astronauts to the moon and, eventually, Mars.

"I will do my best to serve our storied agency to the utmost of my abilities as we reach for new heights and reveal the unknown for the benefit of humankind," Bridenstine said. "NASA represents what is best about the United States of America. We lead, we discover, we pioneer and we inspire. I look forward to our journey together."

After Bridenstine was sworn in, the two men took a few moments to chat with three American astronauts aboard the International Space Station, who sent along their "hearty congratulations" to the new administrator.

Bridenstine resigned from the House of Representatives earlier Monday. He takes over NASA from outgoing acting Administrator Robert Lightfoot, a career NASA engineer-manager who ran the civilian space agency after its previous administrator, former shuttle commander Charles Bolden, retired in the wake of the 2016 presidential election.

A former Navy pilot, Bridenstine majored in economics, psychology and business at Rice University and holds an MBA from Cornell University.

He was elected to represent Oklahoma's first congressional district in 2012, serving on the House Armed Services Committee and the Science, Space and Technology Committee. He is the first politician to be named NASA administrator, and his lack of professional space experience and technical education prompted criticism from Democrats.

He also was criticized for strong partisan positions and questioning human contributions to climate change, putting him at odds with many NASA scientists. He was nominated by President Trump to lead the agency last September and was finally confirmed, by a single vote, last Thursday.

His confirmation was one of the most contentious in NASA history, but Bridenstine thanked his colleagues Monday for their bipartisan support of the space program, saying "that's important in space."

"It's been very bipartisan," he said. "I am excited to continue working with you in this new role."