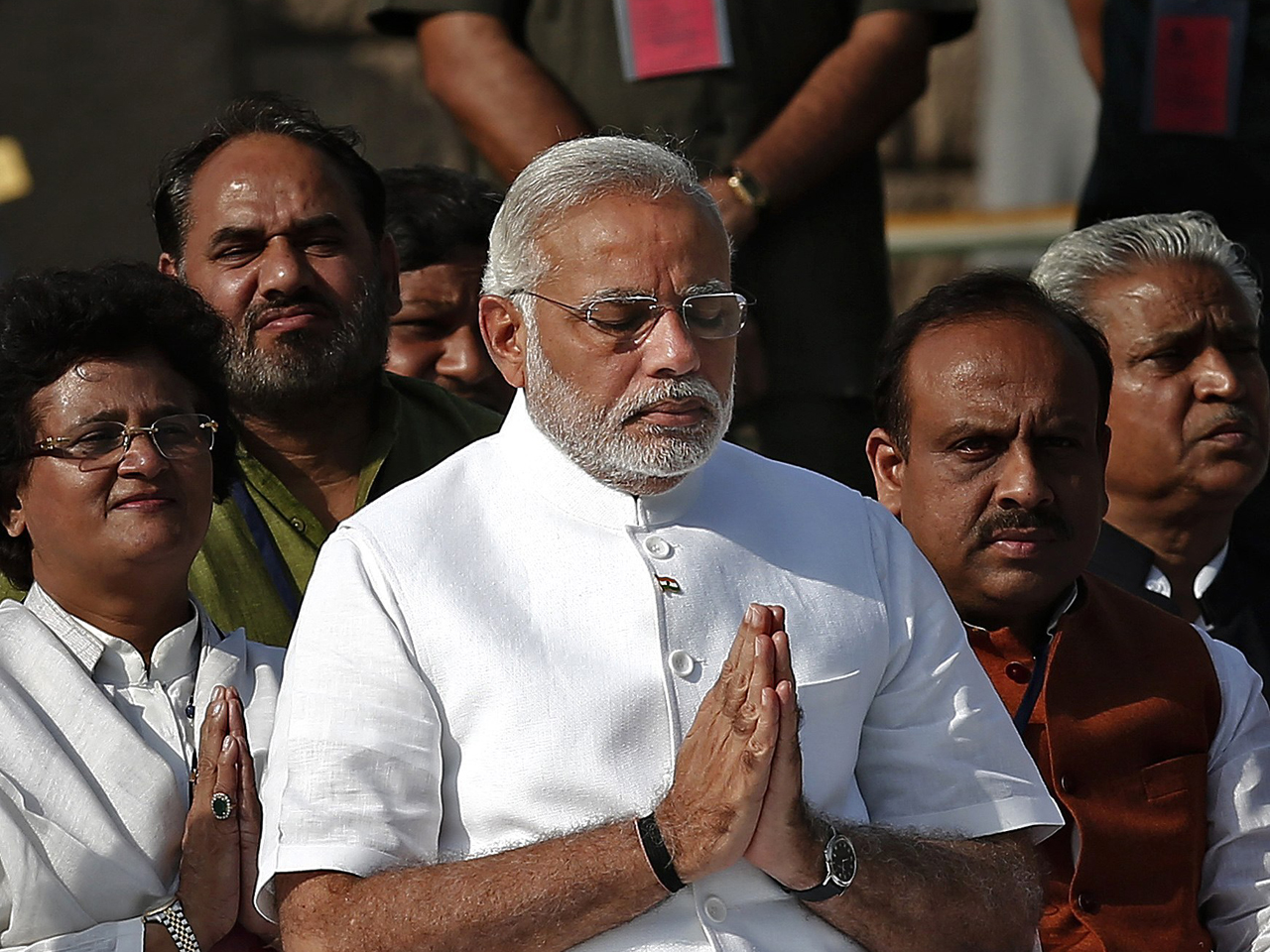 NEW DELHI - Narendra Modi took the oath of office as India's new prime minister at the sprawling presidential palace on Monday, a moment made more historic by the presence of the leader of archrival Pakistan.

Modi's inauguration is the first to which India invited leaders from across South Asia. Heads of government from Pakistan, Sri Lanka, Mauritius, Maldives, Nepal and Afghanistan attended, and Bangladesh was represented by the speaker of its Parliament.

But most eyes remained on Pakistani Prime Minister Nawaz Sharif, whose visit could signal a thaw in relations between the often hostile neighbors.

Indian President Pranab Mukherjee administered the oath to Modi and his Cabinet as thousands of guests, including politicians, business leaders and movie stars, watched. Outgoing Prime Minister Manmohan Singh was seated next to Sharif.

Analysts said Sharif's presence signaled an easing of tensions between the nuclear-armed neighbors. Pakistan and India have fought three wars since their independence from Britain in 1947.

Modi and Sharif are to hold formal talks on Tuesday.

Sharif called his visit "a chance to reach out to each other" and "a great opportunity," in an interview with NDTV news channel.

"Both governments have a strong mandate. This could help in turning a new page in our relations," he added.

Modi and his Hindu nationalist Bharatiya Janata Party won 282 seats in the 543-member lower house of Parliament, well ahead of the 272 it needed for a majority. Analysts say that gives Modi a free hand in choosing his priorities without being constrained by coalition partners.

Modi promised during the campaign that his goals would be good governance, job creation and fighting corruption, a message that struck a chord with voters.

Economic growth has plummeted in the past few years as inflation has risen and exports have declined. The former Congress party-run government became paralyzed by corruption scandals, internal feuding and an inability to deal with the stumbling economy and deep-rooted problems with poverty, infrastructure and education.

In an early indication that he plans to streamline the government, Modi's office said several ministries, especially those dealing with infrastructure, will be combined to make them more efficient and to reduce red tape.

Neelam Deo, the director of Gateway House, a foreign policy think tank in Mumbai, said Sharif's presence at the inauguration "provides an opportunity to commence relations on an encouraging note."

"It also provides an occasion for Prime Minister Modi to lay down India's concerns, particularly on the topic of border security and terrorism," said Deo, a former Indian diplomat.

Relations between Pakistan and India froze after a 2008 attack on Mumbai, India's financial hub, in which Pakistani militants killed 166 people.

Modi is likely to insist Tuesday that Pakistan expedite investigations into the Mumbai attack and put its perpetrators on trial. He is also likely to demand that Pakistan take action against Islamic militant groups operating out of Pakistan to prevent further attacks on India. Other major problems relate to the future of Kashmir, the disputed Himalayan territory over which they have fought two of their three wars.

"It's an occasion for celebration for the people of the entire country who have such high expectations from the new leader," said Anupam Kher, a Bollywood actor and longtime supporter of the BJP.

Security was tight for the ceremony, with more than 7,000 police deployed near the presidential palace, said Mukesh Meena, a police commissioner in New Delhi.

The presidential palace was once the residence of India's British viceroy under colonial rule.

Sharpshooters were positioned on the roofs of nearby government office buildings, and security guards in plainclothes were posted at key places, police said. Roads leading to the palace in the heart of the city were closed to traffic five hours before the ceremony as a security measure, Meena said.