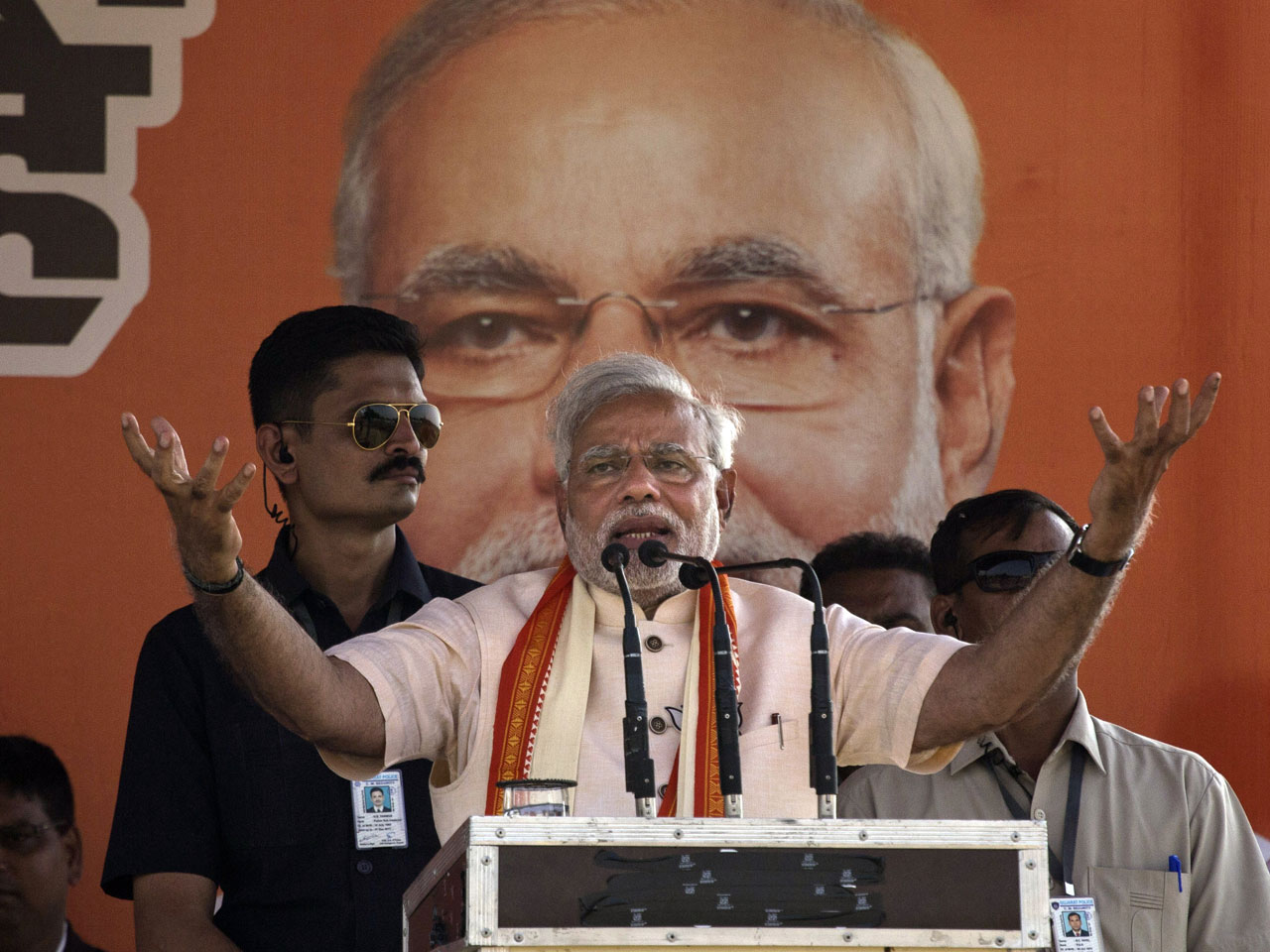 WASHINGTON - Indian elections results due Friday provide a chance to repair relations with the U.S. that were strained by the arrest of an Indian diplomat in New York in December. But there's a big catch: Washington's uneasy relationship with the man expected to become India's next prime minister.

Hindu nationalist leader Narendra Modi was denied a U.S. visa in 2005 for alleged complicity in religious riots in 2002 that killed more than 1,000 Muslims. Exit polls show his Bharatiya Janata Party and its allies with a large lead over the ruling Congress party and its allies after voting ended Monday.

The Obama administration started mending fences in February, when, for the first time in Modi's decade-long tenure as the top official in Gujarat state, the U.S. ambassador met with him. Officials since have said whoever is elected India's next leader would be welcome to the U.S., leaving little doubt that if Modi becomes prime minister, he could visit Washington.

On Monday, President Barack Obama congratulated India on its national election and said the U.S. will work closely with India's next government.

"We look forward to working with the leaders chosen by the Indian people to advance this important partnership and to set an ambitious agenda," State Department spokeswoman Jen Psaki said.

But the controversy over Modi's visa could leave some hard feelings.

The Bharatiya Janata Party says Modi got a clean bill when investigators appointed by India's Supreme Court in 2010 did not find prosecutable evidence that Modi had willfully allowed the 2002 communal violence, but rights groups maintain there's strong evidence linking his administration with the attacks, and he remains a divisive figure. Last year, plans for Modi to address by video a University of Pennsylvania conference on the Indian economy were scrapped following opposition from Indian-American professors, alumni and students.

Still, Modi has friends in America, including successful Indian-American businessmen with roots in Gujarat, and he's steered clear of religious politics in the campaign. U.S.-based analysts and congressional aides say Modi has little foreign policy experience, but his pro-business outlook and focus on reviving India's flagging economy could help the relationship.

"The State Department will have to be very careful in how they manage re-engagement, but in other areas the BJP looks to America as a strong natural partner for defense and economic issues. We saw that the last time the BJP was in power," said Rick Rossow of the Center for Strategic and International Studies think tank in Washington.

Obama also emphasized ties with India, the world's largest democracy. He visited New Delhi in 2010 and declared the U.S.-India relationship would be a "defining partnership of the 21st century." With about 3 million Indian-Americans in the U.S., people-to-people ties are strong.

But there's been disappointment since then. While military cooperation and U.S. defense sales have grown, and two-way trade is now around $100 billion, the economic relationship has been rocky. Washington has been frustrated by India's failure to open up more to foreign investment and address complaints over intellectual property violations. Liability legislation has prevented U.S. companies from capitalizing on the nuclear deal.

"Every time the U.S. pressures India on trade, that's been perceived as the U.S. trying to twist the arm of the Indian government for the benefit of American business," said Jonah Blank of the RAND Corp. think tank. At one point, the push to allow companies like Walmart to open retail stores in India threatened to topple the Congress-led coalition.

But Blank, a former Senate aide to now-Secretary of State John Kerry, said the main reason the relationship has flagged is because neither country made it a top priority. The Obama administration, facing many foreign policy challenges, views India as important, but not urgent. India's government has been preoccupied with domestic politics.

Ties tanked in December when Indian Deputy Consul General Devyani Khobragade was arrested and strip-searched in New York City. She was accused of lying on visa forms so she could bring her maid to the U.S. while paying her a pittance. In India, strip-searching a member of the educated elite would be unthinkable. Khobragade returned to India in January, but charges are still pending.

India retaliated against American diplomats, and the opposition joined in the criticism. In December, Modi canceled a meeting with visiting U.S. lawmakers, and when he met U.S. Ambassador Nancy Powell, he brought up Khobragade's "ill-treatment."

But Modi also said the BJP wanted to strengthen the strategic partnership with the U.S. and build on the foundations laid by Vajpayee, although he's said little about it during the campaign.

The successor to Powell, who is resigning, could play an important role in trying to start off well with the new prime minister.

Obama has yet to nominate a replacement, but India will look for someone close to the White House, said Sanjay Puri, chairman of the U.S.-India Political Action Committee, which has helped organize trips by senior BJP officials to the U.S. He's also urging an early White House invitation for the next Indian leader.