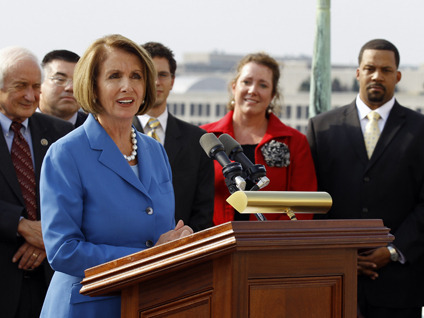 Pressure is growing for House Speaker Nancy Pelosi to step down from her leadership position in the wake of Tuesday's midterm elections in which Republicans took control of the chamber.

Democratic Rep. Heath Shuler of North Carolina said today it was in the "best interest" of House Democrats for Pelosi to step down. He vowed to challenge Pelosi if she tries to hang onto her position and a strong challenger doesn't come forward, Roll Call reports.

"If there's not a viable alternative -- like I said all along -- I can go recruit moderate Members to run in swing districts," he said. "In that situation, I could do it better than she could, and that's what it's going to take. It's going to take moderate candidates to win back those seats."

Schuler is one of the fiscally-conservative "Blue Dog" Democrats who saw their ranks decimated in the midterm elections. Another Blue Dog, Utah's Jim Matheson, told Politico today that he is also calling for Pelosi not to try to remain as the House Democratic leader.

"We just got whupped," he said. "...I'm just suggesting that when you have the largest turnover since 1948, then it's time to shake things up."

Matheson also complained that instead of jobs and the economy "the agenda got off on other things like cap and trade in the House."

Pelosi's unapologetic liberalism has been a problem for the Blue Dogs, many of whom spent much of the 2010 campaign insisting to their constituents that they do not share the speaker's legislative agenda.

Pelosi said yesterday she plans to talk to her family and her caucus and "pray over it and decide how to go forward."