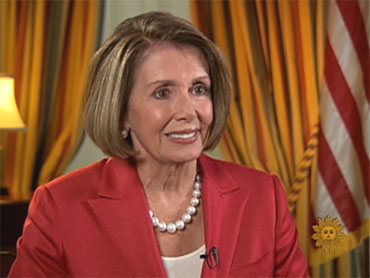 House Speaker Nancy Pelosi, who will lose her position when Republicans take over the House in the new Congress, said in an interview on "ABC World News with Diane Sawyer" today that she had "no regrets" over the way she has conducted herself as speaker.

"No regrets because we believe we did the right thing and worked very hard in our campaigns to convey that to the American people," she said.

Pelosi acknowledged that losing the House was a "tough loss" and "very disappointing." She said in a pair of phone calls yesterday she and the president expressed pride in their work and sadness about their colleagues who lost.

Pelosi, who is 70, was pressed on whether she would consider retirement. (She was reelected yesterday.) She said she would eventually "start thinking about what I'll do next, but it's never been about me."

Stating that her "real accomplishment in life is being a mom and a grandmother," the first female House speaker said she would talk to her family and her caucus and "pray over it and decide how to go forward."

Pressed on whether the loss of the House stings her personally, Pelosi said she hasn't "had a moment alone to even think about myself."

"When I get time for that, I'll call you, and I'll let you know how it feels," she said.

Pelosi said she likes incoming House Speaker John Boehner, adding that she is "always very respectful of my colleagues." She said she hopes he leads and is "not held back by the slowest ship" in his GOP convoy.

Pelosi also predicted Mr. Obama will be reelected, and, echoing the president, said the "emergency" actions he took in the first two years were interpreted by some as "too activist." She said such measures were needed to avert a depression.

Asked to reflect on her time as speaker, Pelosi expressed pride in a "job well done." But she also noted that her prominent role had come to an end. It was time, she said, "to move on."