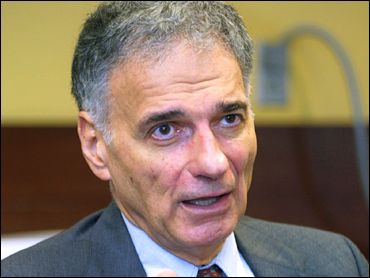 Brushing aside the "spoiler" label given him by Democrats after the 2000 election, Ralph Nader says he is running again for president, this time as an independent.

But the consumer advocate and former Green Party presidential candidate acknowledged Monday that it will be difficult to get his name on the ballot in all 50 states as an independent.

"It won't be easy," Nader told reporters at a news conference.

Nader lacks major party support or resources for his candidacy, which has riled the Democratic Party. Unlikely to get the Green Party nomination, he faces an uphill battle to get on the ballot, which requires money and signatures.

The first target is Texas, where Nader needs 65,000 signatures in a 60-day period from voters who are not participating in the Democratic or Republican primaries.

As an independent candidate, Nader won't be eligible for up to about $18.6 million in government funding for the primary season, Federal Election Commission spokesman Bob Biersack said. And his failure to capture 5 percent of the vote in 2000 — he got 2.7 percent — also prevents him from receiving taxpayer funding in the general election.

On Sunday, Nader confirmed the decision that many Democrats had been expecting – and fearing – for weeks. "There's just too much power and wealth in too few hands. Washington is now a corporate-occupied territory," Nader told NBC's "Meet the Press."

"There are people all over the country wishing he hadn't done it (before)," said Democratic National Committee chairman Terry McAuliffe on CBS News' Face the Nation. "They remember the 2000 election, they remember New Hampshire, they remember Florida, and the margins of victories there."

Asked whom they would vote for if the choice were just between Gore and Bush, Nader voters chose Gore by more than a two-to-one margin; about one-third of Nader voters said they wouldn't have voted.

In an interview Sunday with Knight Ridder, Nader said if he were spoiling anyone's chances it would be the Republicans'.

"This will enhance the Democrats," argued Nader.

"Right now, I am persuaded I will draw far more independents and Republicans who would otherwise have voted for Bush than I would get from the Democratic Party candidate," he said. "Conservatives are furious with Bush over deficits, the Patriot Act, corporate subsidies, corporate support of pornography, NAFTA, GATT and sovereignty."

Nader said he could attract like-minded citizens, especially young people from the former campaign of liberal Democrat Howard Dean, the former Vermont governor who withdrew from the presidential campaign last week. Dean said he would support the Democratic nominee.

"I think I'm going to have a campaign that will speak to those people who supported him last time," said Kerry. "This is going to be a different campaign this time, I assure you."

Edwards said, "It's important for the Democrats to have somebody at the top of the ticket who will be appealing to some of the voters that Ralph Nader might attract." The Nader campaign, he added, "will not impact my campaign."

Nader's announcement came after an unprecedented effort to dissuade him from many of his core supporters, including the editors of the liberal magazine, The Nation. McAuliffe was so concerned about Nader's possible entry into the race that he met with him personally to try to persuade him not to run.

Staking out territory well to the left of Kerry and Edwards, Nader inveighed against the U.S. invasion and occupation of Iraq and said a strong case could be made for Mr. Bush's impeachment on the issue of whether the president misled the nation about the threat posed by former Iraqi dictator Saddam Hussein.

On domestic issues, Nader said he would repeal all of Mr. Bush's tax cuts and indicated he would support gay marriage. Kerry and Edwards both would raise rates only for the wealthiest taxpayers; neither Democrat supports same-sex marriage.

Republicans weren't buying Nader's argument that he would hurt the president.

Republican National Committee chairman Ed Gillespie, also appearing on Face The Nation, said, "From my perspective, regardless of what Ralph Nader does, President Bush is going to be re-elected come November."

Nader decided not to run again on the Green Party ticket in December because the long nomination process would have hampered his campaign.

The deeply divided Green Party will decide at its Milwaukee convention in June whether to nominate another candidate, try to redraft Nader, not run a candidate, or run hard only in non-swing states, said spokesman Scott McLarty.