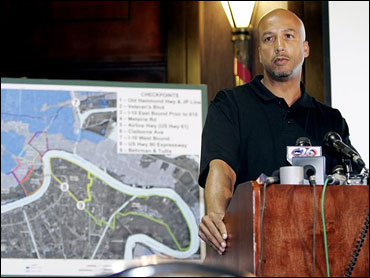 New Orleans Mayor C. Ray Nagin, who had hoped to begin reopening parts of the city despite

opposition from federal officials
, has postponed his plan at least temporarily as Tropical Storm Rita looms at sea with the potential of becoming a hurricane headed for Louisiana.

"I am concerned about this hurricane getting in the Gulf," said Nagin. "If we are off, I'd rather err on the side of conservatism to make sure we have everyone out."

Nagin has ordered residents who slipped back into the still-closed parts of the city to leave immediately. He has also urged everyone already settled back into the city's Algiers section to be ready to evacuate as early as Wednesday.

The mayor's change of heart came several hours after some New Orleans evacuees began trickling back to the first neighborhood opened as part of Nagin's plan, the scarcely damaged Algiers section.

city levee break again (video).
And even before Rita was on the radar, New Orleans was no place for the weak. Alfonsi reports that clean water is still hard to come by, much of the city is still in the dark, and stores are in shambles.

About 20 percent of the city is still flooded, down from a high of about 80 percent after Katrina, and the water was expected to be pumped out by Sept. 30.

Monday, the Louisiana State Health Department raised the death toll from Hurricane Katrina by 90 to 736. The toll across the Gulf Coast is at least 973.

Nagin had wanted to reopen some of the city's signature neighborhoods over the coming week in order to reassure the people of New Orleans that "there was a city to come back to." He said he had strategically selected ZIP codes that had suffered little or no flooding.

"Now we have conditions that have changed. We have another hurricane that is approaching us," he said. He warned that the city's pumping system was not yet running at full capacity and that its levee system was still in a "very weak position."

"We're watching Tropical Storm Rita's projected path and, depending on its strength and how much rain falls, everything could change. Residents moving into the area may have to evacuate again," Col. Duane Gapinski, commander of the Army Corps of Engineers task force that is draining New Orleans and repairing the levees.

Under the mayor's plan, Algiers opened Monday, and the Uptown neighborhood, the Garden District and the historic French Quarter were supposed to reopen one ZIP code at a time between Wednesday and next Monday, bringing a total about 180,000 of New Orleans' half-million inhabitants back.

Nagin saw a quick reopening as a way to get the storm-battered city back in the business of luring tourists. But federal officials warned that such a move could be a few weeks premature, pointing out much of the area does not yet have full electricity and still has no drinkable water, 911 service or working hospitals.

Tuesday, at an Interstate 10 checkpoint of traffic heading into the city from the north, cars were backed up for two hours. Tractor-trailers, emergency vehicles and National Guard trucks shared the highway with cars towing trailers full of hurricane gear and pickup trucks with their beds loaded with water, cleaning materials and coolers.

It was clear that at least some of the traffic was headed to sections of the city that have not yet officially opened.

Algiers, a neighborhood of 57,000 just across the Mississippi River from the French Quarter, is home to many of the companies that make floats for Mardi Gras parades. Unlike much of the rest of the city, it saw little damage from Hurricane Katrina three weeks ago and has electricity and drinkable water.

"Obviously we need to get businesses up and running any way we can," said Barry Kern, whose float businesses is stocked to the rafters with oversized imaginary creatures. "If we don't start somewhere, where do we start?"

He said he recognized that the city might be unfit for children, but that there are key businesses that need to be reopened, like his, so that people can start making money and the city can get back on its feet.

In Washington, at least one senator is considering major budget cuts in order to pay for the damage caused by Katrina.

"Look, everything has changed," McCain said. "We didn't anticipate around $200 billion expenditure of taxpayers dollars a month ago."

President Bush last week ruled out raising taxes to pay Katrina expenses and said other government spending must be cut. His aides have said, though, that no such cuts have yet been identified and the hurricane relief effort will temporarily swell the deficit.