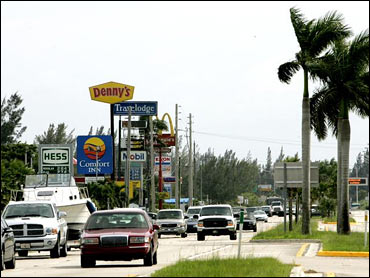 Thousands of residents fled the Florida Keys as Tropical Storm Rita barreled toward land, poised to grow into a hurricane with a potential 9-foot storm surge and sparking fears it could hit the already battered Gulf Coast.

South Floridians kept a wary eye on Rita, which threatened to arrive Tuesday and drop up to 15 inches of rain on some parts of the low-lying island chain. Oil prices surged on the possibility that oil and gas production would be interrupted once again.

Rita is now centered about 160 miles east-southeast of Key West, moving west-northwest at about 15 mph, with winds of 70 mph. It is expected to strengthen into a Category 1 hurricane as it approaches the Keys.

Hurricane warnings were posted for the Keys and Miami-Dade County, the hurricane center said. Residents and visitors were ordered to clear out of the Keys, and voluntary evacuation orders were posted for some 134,000 Miami-Dade residents of coastal areas such as Miami Beach.

evacuation was an easy sell (video)
for many in the Florida Keys.

"We're going north, wherever the storm isn't going," John Williams said after he and Lisa Sparks got married Monday morning on the beach in Key West. They joked that if they had a baby girl they would name her Rita.

The man in charge of removing water from New Orleans and repairing levees warned that Rita could affect efforts to drain water out of the city.

"We're watching Tropical Storm Rita's projected path and, depending on its strength and how much rain falls, everything could change," said Col. Duane Gapinski, commander of the Army Corps of Engineers Task Force Unwatering.

In the Bahamas, fishermen dragged their boats to dry land and some people shuttered their windows - a sign that that normally laid-back islanders are concerned about Rita.

"After what happened to New Orleans and the Gulf area, nobody is taking this storm lightly," said Ray Mackie, the owner of Tranquility Hill fishing lodge on Andros.

Officials in Galveston, Texas - nearly 900 miles from Key West - have called for a voluntary evacuation. Forecasters say Rita could make landfall in Mexico or Texas by the weekend, and there is a possibility that it could turn toward Louisiana.

Chevron Corp. and Shell began evacuating employees from offshore oil- and gas-drilling platforms. Other companies were watching the storm's track but had not yet begun evacuations.

"These storms are pretty big and broad sometimes, so you take no chances," said Chevron spokesman Mickey Driver.

About 56 percent of the Gulf's oil production was already out of operation Monday because of Katrina's damage, the federal Minerals Management Service said.

Elsewhere in the Atlantic, Hurricane Philippe is far out at sea and posed no immediate threat to land. The hurricane season started June 1 and ends Nov. 30.