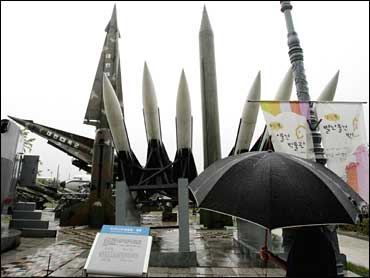 The United States expects North Korea to maintain a freeze on missile tests, and a test-fire would draw an appropriate response, President Bush's spokesman said Sunday.

"We do not want to have a missile test out of North Korea," Tony Snow said.

His comments came amid signs that North Korea was preparing to test a long-range missile that could reach the continental United States.

"The North Koreans themselves decided in 1999 that they'd place a moratorium on this kind of testing, and we expect them to maintain the moratorium," Snow told "Fox News Sunday."

The president, national security adviser Stephen Hadley and Secretary of State Condoleezza Rice have been in contact with more than a dozen countries and communicated with North Korea through the U.N. representative, Snow said.

"If they go ahead with a test, then we will have to respond properly and appropriately at the time," Snow told CNN's "Late Edition." Asked if he could explain what that meant, Snow replied, "No."

Snow noted that the North Koreans pledged in September to return to six-nation talks, which are intended to persuade the communist nation to abandon its nuclear program, and "bargain in good faith."

"If they did so," Snow said, "there was also the possibility of a parallel track that could include some conversations with the United States. We expect them to come back to the table."

North Korea, branded by Mr. Bush in 2002 as part of "an axis of evil" with Iran and Iraq, has not fired a long-range missile since August 1998, when it sent a rocket flying over parts of Japanese territory. Since 1999, North Korea has abided by a self-imposed freeze on long-range tests.

Signs of a launch have grown in recent days. Reports say a missile has been assembled at a launch pad on the North's eastern coast and may have been fueled for launch.

There was no mention of a missile in a report from North Korea's official media on a national meeting Sunday marking the anniversary of leader Kim Jong Il starting work in the country's communist party.

At the meeting, officials talked about increasing the North's "military deterrent," a phrase commonly used by the country to refer to its nuclear program. North Korea contends it needs the program for a defense to a possible U.S. attack; Washington denies any intention to invade.

Two senators urged China to be more active on the issue.

Sen. Dianne Feinstein, D-Calif., said a "very robust diplomacy, a greater pressure from the Chinese really has to be made."

She said opening up North Korea's society could help "begin to move this renegade regime away from this very frightening dependence on nuclear power."

"The more a country is isolated, the more the behavior becomes renegade and the less the country has to lose," she said.

Sen. Pat Roberts, chairman of the Senate Intelligence Committee, said of the North Korean leader: "The only card he has to play on the world stage is to do something like this."

"The key is China. The key is the six-party talks," said Roberts, R-Kan.

Meanwhile, Japan said it would file a "fierce" protest and seek an immediate U.N. Security Council meeting if the North test-fires what is believed to be a Taepodong-2 missile.

Japanese Foreign Minister Taro Aso said his country would not immediately resort to arms if North Korea fires a missile but would take the issue to the United Nations.

"We will naturally file a stern protest and it will be fierce," Aso said on TV Asahi, adding that the North would gain nothing from the test.

Aso also reportedly said it would be "inevitable" that the Security Council would consider imposing sanctions on Pyongyang if it goes ahead with the missile launch.