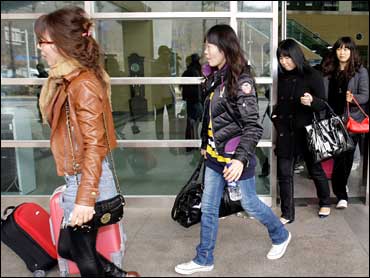 North Korea agreed to fully reopen its border crossing Tuesday to South Koreans commuting to jobs at factories in a northern economic zone, according to the Unification Ministry in Seoul.

The full reopening comes four days after Pyongyang shut down the border last week, stranding hundreds of South Koreans who work in Kaesong but live in South Korea.

North Korean officials let them return home Monday, but refused entry to others seeking to travel to Kaesong. The partial closure meant factories in the industrial zone had no new deliveries of goods for days.

The North Korean military relayed a letter Tuesday saying it would reopen the border to traffic from the south, Unification Ministry spokeswoman Lee Jong-joo said in Seoul. More than 540 South Koreans were expected to cross into the north, while some 300 applied for permission to head south Tuesday afternoon, she said.

North Korea has provided no explanation for the closures, which have unnerved business owners who rely on South Korean managers, expertise and raw materials for factories that employ some 38,000 North Korean workers just across the border.

Pyongyang had criticized Seoul's decision to go ahead with 12 days of joint military exercises with the U.S. last week at a time of heightened tension on the peninsula. As the war games got under way last Monday, the North's military severed the only communications hot line between the Koreas and banned traffic across the border.

Meanwhile, North Korea's premier arrived in China on Tuesday on an official visit to his country's biggest ally amid heightened tensions in the region due to Pyongyang's plans for a rocket launch next month.

Premier Kim Yong Il began his five-day trip that will include talks with Chinese President Hu Jintao and Premier Wen Jiabao, and a ceremony marking 60 years of diplomatic relations between the two nations.

North Korea's planned rocket launch is expected to top the agenda. The North says it plans to launch a communications satellite in early April, but many suspect it will be a cover for a long-range missile test. North Korea is banned from firing either device under a U.N. Security Council resolution prohibiting it from ballistic activity.

The United States, along with other governments, has voiced strong objections, saying it would be "provocative and destabilizing."

China - North Korea's biggest benefactor and longtime communist ally - has avoided directly criticizing the rocket launch but has called for a toning down of regional tensions.

Relations between the two Koreas have deteriorated since President Lee Myung-bak took office a year ago with a new, tough policy on Pyongyang. One by one, joint projects developed during the previous era of warming ties have been suspended.

The Kaesong complex, the most prominent of the landmark inter-Korean projects and a lucrative source of hard currency for the impoverished North, has been allowed to operate with a skeleton South Korean staff.

The recent closures, however, left many factories languishing without the goods needed to produce the watches, shoes, electronics equipment and kitchenware churned out from some 100 plants in the complex, the Kaesong business association said Monday.

At least 10 firms halted operations and many more warned they would be forced to suspend production within days if the border restrictions were not eased, the Corporate Council for the Gaesong Industrial Complex said Monday.

At the border, activists and defectors released 10 balloons filled with a total of 100,000 anti-North Korea leaflets, some with about $1.30 in North Korean won tucked inside as enticement, in a move bound to further ruffle Pyongyang.

The leaflets urge North Koreans to rise up against autocratic leader Kim Jong Il and contained a taboo subject: Kim's many alleged romantic relationships. Some also accuse the North of holding South Koreans in Kaesong as "hostages," organizer Park Sang-hak said by telephone from the border.

The activists' campaign is a major source of irritation to North Korea, which sees the leaflets as a violation of a 2004 inter-Korean agreement to end decades of propaganda warfare in the Demilitarized Zone. Pyongyang's Minju Joson newspaper condemned the activists Tuesday as "human scum."

Seoul says it cannot stop them, citing freedom of speech, but repeatedly has urged the campaigners to refrain from provoking the North.

Park said the regime warns North Koreans against touching the currency or reading the propaganda.

"'If you pick them up, your hands will rot so pick them up with gloves and give them to the authorities,"' he said the regime tells North Koreans, citing recent accounts from unidentified contacts inside the reclusive country.

The two Koreas technically remain at war because their three-year conflict ended in 1953 with an armistice, not a peace treaty. The DMZ dividing the foes is one of the world's most heavily armed.