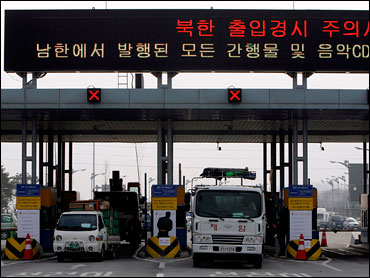 But North Korea refused to let cargo or workers back across the border to the dozens of factories in Kaesong run by southern business managers, the Unification Ministry said in Seoul, forcing a number of factories to suspend operations.

The border restrictions - the second in a week - have unnerved South Korean business owners who run factories in Kaesong and rely on raw goods trucked from the South to the impoverished North to produce everything from watches and shoes to kitchenware and electronic goods.

South Korea warned that the North would be held accountable for any economic losses caused by the border restrictions.

"We cannot expect stable development of the Kaesong complex if free passage of our personnel and smooth transportation of supplies are not guaranteed," Unification Ministry spokesman Kim Ho-nyeon said in a statement.

North Korea has provided no official explanation for refusing the Kaesong workers entry, but Pyongyang has been backtracking from reconciliation with South Korea for the past year.

The two Koreas technically remain at war because their three-year conflict ended in 1953 with an armistice, not a peace treaty. The Demilitarized Zone dividing the foes is one of the world's most heavily armed borders.

Relations improved under two liberal presidents in Seoul, but have worsened since conservative President Lee Myung-bak took office a year ago. Most of the landmark, joint inter-Korean projects created during an earlier bloom in relations have been suspended since Pyongyang severely restricted border traffic in December.

Tensions have further intensified in recent weeks with the North announcing it will send a satellite into space - a launch some fear will be cover for a test of its long-range missile technology.

A skeleton staff of South Koreans has been allowed to cross the border to run the last joint project remaining: more than 100 Kaesong factories that employ some 38,0000 North Koreans. The firms give North Korean authorities about $70-$75 cash per worker each month, providing the regime with much-needed hard currency.

But Pyongyang last week cut off the only communications hot line between the two Koreas and shut down the border for a day to protest joint U.S.-South Korean military exercises taking place across the South through Friday.

More than 700 South Koreans were stuck in Kaesong when North Korean officials shut the crossing.

The North agreed to let some 450 South Koreans return home Monday but refused permission to 650 others in the South seeking to get to their jobs in Kaesong, according to the Unification Ministry.

With the prospect of severe short-staffing Tuesday, many chose to remain in Kaesong another night, with fewer than 300 returning to the South, the ministry said.

The uncertainty has taken a toll on production. At least 10 firms have halted operations, and many more will be forced to suspend production within a week if trucks aren't allowed through the border, according to the Corporate Council of Gaesong Industrial Complex, which is made up of South Korean firms operating in the enclave.

One South Korean working at footwear maker Samduk Stafild said by telephone from Kaesong that his factory is struggling from a lack of raw materials. He asked not to be named, saying he was not authorized to speak to the media.

Some firms may reduce or delay paying North Korea because of the slowdown in production, the Chosun Ilbo newspaper quoted an unidentified senior government official as saying.

"The North hopes South Korea will switch back to a policy of reconciliation and cooperation" to prevent a complete shutdown of Kaesong, the North Korea expert at the private Sejong Institute said Monday.

President Lee has refused to ply the North with aid until Pyongyang abides by its commitment to dismantle its nuclear program. The North agreed in 2007 to disarm in exchange for aid.