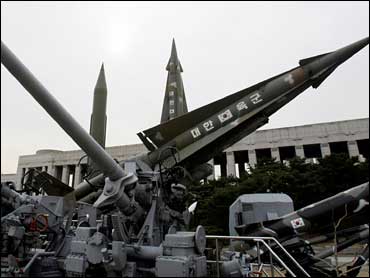 North Korea told an international organization it will fire a satellite into space between April 4-8, South Korea said Thursday, giving a timeframe for a launch that neighboring governments suspect will test missile technology.

An official at South Korea's Ministry of Land, Transport and Maritime Affairs said Thursday that officials confirmed with the International Maritime Organization that the North had informed the organization of its schedule for the launch.

Do Myung-hwan, the official, said North Korea also notified the IMO that the launch will be made in an easterly direction. The London-based IMO could not immediately be reached as it had yet to open for business Thursday.

South Korea, Japan and the United States believe the launch will test missile technology in violation of a 2006 U.N. Security Council resolution banning Pyongyang from ballistic missile activity, and have urged the North not to go forward.

Separately, the North's official Korean Central News Agency (KCNA) said earlier that the country has informed the IMO as well as the International Civil Aviation Organization and others "of necessary information for the safe navigation of planes and ships" amid preparations for the launch.

That dispatch did not say when a launch would take place, but South Korea cited the dates April 4-8, confirming a report by Yonhap news agency.

Reports began emerging in February that North Korea was preparing to test a long-range missile. North Korea has since sought to portray the launch as a legitimate and peaceful space program, and has vowed to retaliate against anyone who tries to prevent it.

North Korea's rocket plans have stoked already tense relations with the United States and South Korea. Pyongyang accuses them of preparing for an invasion during annual military drills taking place this week, a charge the two countries deny.

North Korea's military cut off a hot line with South Korea and temporarily closed the border this week before reopening it to allow South Koreans to travel to a joint industrial zone in the North.

In Washington, Secretary of State Hillary Rodham Clinton said "a range of options" could be taken against North Korea if the country fires a missile.

She said Wednesday that the U.S., South Korea, Russia, Japan and China will discuss a response if the North goes forward with a missile test. The five countries are involved in disarmament talks aimed at ending North Korea's nuclear programs.

Clinton said a senior U.S. special envoy for North Korea had been prepared to go to North Korea for talks at a moment's notice during a trip last week to Asia.

(AP Photo/Alex Brandon)
Instead, she told reporters, the North Koreans did not allow Stephen Bosworth to visit Pyongyang for discussions on stalled international nuclear disarmament talks.

"He was not invited to go to North Korea, which we regret," Clinton said after meeting with Chinese Foreign Minister Yang Jiechi. (at left)

Clinton said the Obama administration remains committed to restarting the six-nation talks "at the earliest possible moment." Those discussions have stalled over the North's refusal to commit to a process to verify its nuclear programs.

Clinton also urged the North Koreans to give the world "evidence" of "their willingness to re-engage with all of us and to work together."

The KCNA report noted that the North recently joined two U.N. treaties on space exploration, which "will contribute to promoting international confidence and boosting cooperation in the scientific research into space and the satellite launch for peaceful purposes." It was not immediately possible to confirm that element of the report.

North Korea has faked a satellite launch in the past to cloak its missile development. In 1998 it claimed to have put a satellite into orbit after conducting a missile test that flew over Japan and splashed down in the Pacific Ocean.