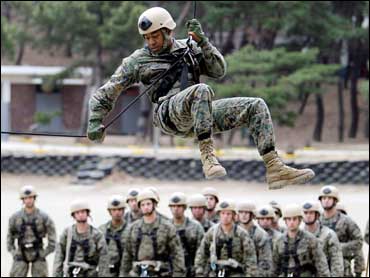 The North Korean military cut the communications line on March 9 to protest Seoul's decision to hold 12 days of joint military exercises with U.S. troops across South Korea at a time of heightened tension on the peninsula.

Meanwhile, two American journalists were missing Friday after they were reportedly detained by North Korea for ignoring warnings to stop shooting video of the reclusive country.

Journalists Laura Ling and Euna Lee, reporters for former Vice President Al Gore's online media outlet Current TV, were seized Tuesday along the Chinese-North Korean border, according to the State Department and an activist who had worked with them. Their Chinese guide also was detained although a third journalist with the group, Mitch Koss, apparently eluded capture.

"We will again restore the North-South military communications," said a message faxed to South Korean border officials, according to Lee.

The hot line is the only means of quick communication left between the two Koreas and is vital for coordinating the passage of people and goods across their border - one of the most heavily fortified in the world. The two countries technically remain at war because their three-year conflict ended in a truce, not a peace treaty, in 1953.

After a decade of warming ties, relations have deteriorated since President Lee Myung-bak ended the flow of unconditional aid to Pyongyang a year ago. North Korea has cut several hot lines since he took office, and in December banned nearly all traffic through its border crossing.

Since the war games began March 9, North Korean officials have refused three times to let South Korean workers commute to and from jobs at a lucrative industrial park in the border town of Kaesong, leaving hundreds stranded in North Korea.

The repeated closures have called into question the future of the factory, a joint economic venture once hailed as a promising example of inter-Korean cooperation and a key source of hard currency for the impoverished North.

The North gave no reason for Friday's closure, the Unification Ministry spokeswoman said.

More than 100 South Korean companies operate factories that rely on goods trucked in from the South to produce everything from shoes to kitchenware using North Korean labor.

As a routine, South Korean border officials must submit a list of people seeking to cross the border for approval. Without the hot line, the requests were submitted by hand and by fax, ministry officials said.

Vice Unification Minister Hong Yang-ho said shutting down the complex was not an option. But he said the border closures are causing "serious economic damage" and warned the North it would be held responsible for losses.

"There can be neither dialogue nor the normalization of the inter-Korean relations as long as the Lee group kicks up the 'human rights' ruckus," the Committee for the Peaceful Reunification of Korea said in a statement carried Friday by state-run media.