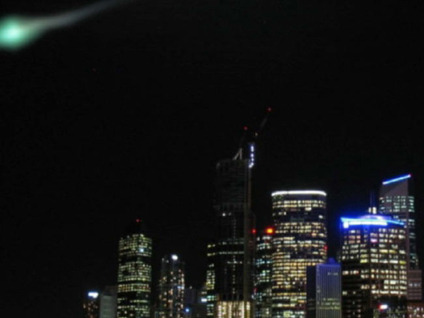 By Charles Q. Choi This story originally appeared on LiveScience.com

Green fireballs that streaked across the sky and rolled down an Australian mountainside four years ago, spurring reports of UFOs in the area, might have been meteors and ball lightning, a researcher suggests.

At least three traffic-light green fireballs brighter than the moon but not as bright as the sun blazed over northeast Australia on May 16, 2006. A farmer saw one with a blue tapering tail pass over the mountains of the Great Divide about 75 miles (120 kilometers) west of Brisbane, then watched a phosphorescent green ball about 12 inches wide (30 centimeters) roll slowly down the side of a mountain, bouncing over a rock along the way. [Image of green fireball]

Green fireballs have been seen many times in the sky, and are typically explained as meteors whose shockwaves lead to electrically charged oxygen similar to that seen in auroras. In fact, a commercial airline pilot who landed in New Zealand that day reported seeing a meteor breaking up into fragments, which turned green as the bits descended in the direction of Australia. The timing of the fireballs suggests they might have been debris from Comet 73P/Schwassmann–Wachmann 3, said physicist Stephen Hughes at the Queensland University of Technology in Brisbane.

The green ball the farmer saw roll down the slope was almost certainly not a meteorite, Hughes said. No perfectly round meteorite a foot wide has ever been found, and if it were one, it wouldn't be rolling slowly down a hill.

Instead, Hughes suggests it might have been ball lightning, mysterious glowing orbs of light usually seen during thunderstorms. The green fireball might have provided an electrical connection between the ground and the ionized layer of atmosphere known as the ionosphere, providing the energy needed for ball lightning.

Meteors are often mistaken for UFOs, as are lightning, balloons and military experiments.

"A transient electrical link between the ionosphere and ground, created by meteors or some other means, could help to solve the mystery of many UFO sightings," Hughes told LiveScience. "Since such balls would be very insubstantial they would be able to move and change direction very fast as has often been observed."

Hughes detailed his findings online Nov. 30 in the Proceedings of the Royal Society A.

Lightning Strikes: The Best of Your Amazing Images