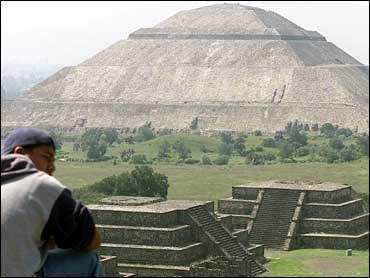 Archeologists digging at Mexico's famed Pyramid of the Moon think they could be a few feet away from a royal grave, key to unlocking the secrets of the first major metropolis built in the Americas.

The Aztecs stumbled on these awesome stone pyramids, plazas and temples in about 1500 A.D., several centuries after the city was torched and abandoned. They believed it was a divine work and so named the site Teotihuacan, "City of the Gods" in their indigenous nahuatl tongue.

After 200 years of excavations and research, archeologists are similarly in the dark about who built the city, which at its peak in 500 A.D. is believed to have housed 200,000 people, rivaling Shakespeare's London, but a millennium earlier.

It is not known who ruled in Teotihuacan -- founded around the time of Christ 30 miles northeast of Mexico City and mysteriously collapsing around 700 A.D. -- or what the original city was called, or what language its people spoke.

But Japanese archeologist Saburo Sugiyama and his Mexican colleague, Ruben Cabrera, believe some of the answers lie inside the Pyramid of the Moon and their recent find of three skeletons of high-ranking officials or priests has given them hope of unraveling Teotihuacan's mysteries.

"We don't know if they were sacrificed, but their form suggests they were of a very high social ranking, like the priests that appear on wall etchings, heavily adorned with collars, ear and nose rings, possibly with headdresses," Sugiyama said this week at the foot of the square-sided pyramid.

A pump blows air into the narrow tunnel that a team of archeologists under Sugiyama and Cabrera are excavating just below the peak of the pyramid. Musky wooden beams and planks hold up the tunnel, dimly lit by a string of bare light bulbs.

Some 20 yards inside, the excavation widens and deepens at the point where the archeologists discovered the three skeletons, all seated cross-legged with their hands clasped in front.

Aside from the bodies, the dig has also uncovered jade stones, figurines, animal remains and carved sea shells.

It is not the first time graves have been discovered in Teotihuacan, an extremely popular tourist site.

Cabrera and Sugiyama, who started their excavation of the Pyramid of the Moon in 1998, had previously uncovered 22 other piles of bones -- all sacrificial offerings -- in three separate sites in the 140-foot-high pyramid.

But Sugiyama says these latest three skeletons are of a higher social rank and higher up in the pyramid's structure -- whereas other bodies previously unearthed were sacrificed soldiers or prisoners of war and closer to the ground.

Sugiyama believes the latest skeletons are only part of a larger grave. His theory is that they are very close to a burial site of a Teotihuacan king or governor.

"We have not found any burial chamber tombs to date. But it is possible that there is something special, the grave of a governor or someone of maximum importance," Sugiyama said. "If anyone important died, it's logical they are buried here."

Sugiyama and Cabrera have focused their efforts to unlock the mysteries of the city on the Pyramid of the Moon -- rather than its bigger neighbor the Pyramid of the Sun or even the ornate Feathered Serpent Pyramid -- because it is strategically at the top end of Teotihuacan's north-south axis road, known as the Avenue of the Dead.

Teotihuacan was a master-planned city, spanning 12 square miles and thrived longer than imperial Rome, its contemporary. As originally built, the Pyramid of the Sun rose to a peak of 195 feet.

"The origins of Teotihuacan are in Teotihuacan itself, and the Pyramid of the Moon has to have a very important significance ... the place with more possibilities of obtaining information," said Cabrera.

The Pyramid of the Moon is a structure of seven pyramids built on top of each other.

Sugiyama and Cabrera, unassuming scientists dressing in blue jeans and distant from Hollywood's archetypal archeologist Indiana Jones, are the first to dig close to the top of the pyramid for clues to the city's past.

"It is a part of the building that has not been investigated ... let's say its virgin territory," said Cabrera.