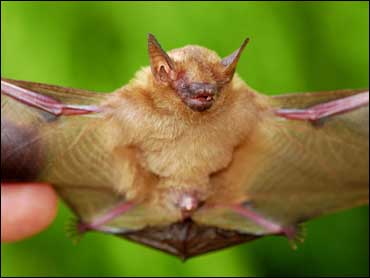 For a truly one-of-a-kind holiday gift, one that could bestow a bit of immortality on a loved one or a friend?

If so, Purdue University has the goods: The school is auctioning the naming rights to seven newly-discovered bats and two turtles. Winning bidders will be able to link for the ages a relative, friend - or even themselves - to an animal's scientific name.

The first of the nine auctions began Monday when the school put up for grabs the naming rights to a tiny gold and black insect-munching bat found in Central America.

The winning bidder will be announced just before Christmas, said John Bickham, a Purdue professor of forestry and natural resources who discovered or co-discovered the nine species.

He expects the auctions to attract wide interest with the chance to include a person's Latinized name in a new species' scientific name - a tradition that dates to the mid 18th century.

"Unlike naming a building or something like that, this is much more permanent. This will last as long as we have our society," he said Monday.

Bickham said the first bat whose naming rights are up for auction is a member of a group of little yellow bats that live in tropical lowlands from Mexico south to Brazil. That flying mammal is the smallest bat found to date in Central America, weighing about 3 grams.

"We're talking about a bat that weighs less than a teaspoon full of water," said Bickham, who is the director of Purdue's Center for the Environment.

The nine species were found in recent years by Bickham and colleagues in remote areas of Mexico, Central America, South America and Africa. Details of the current auction can be found here.

Last year, Conservation International auctioned the naming rights to 10 new fish species during a gala "Blue Auction" in Monaco that raised more than $2 million for the Washington, D.C.-based conservation group. The highest winning bid was $500,000 for the honor of naming a new species of "walking" shark.

Bickham, who has been studying the genetics of bats and other animals for nearly 30 years, said a portion of the money raised by the auctions will go toward the laborious work needed to properly describe each of seven bats and two turtles according to scientific protocol.

The remainder will help preserve the natural areas where each creature was found and educate the public about the importance of protecting the planet's wide range of animals and plants.

Bickham said he doesn't think that the fact that they could name someone after a bat would dissuade would-be bidders from bidding on the seven bats.

"Bats may be an acquired taste, but there are a lot of people very interested in them and very concerned about their welfare. Bats comprise one quarter of all mammal species," he said.

Baeturia laureli and B. hardyi, cicadas named after the comedy team Stan Laurel and Oliver Hardy

Eristalis gatesi, a flower fly named after Bill Gates ("in recognition of his great contributions to the science of Dipterology"). Gates' Microsoft partner Paul Allen got one, too: Eristalis alleni.

Serendipaceratops arthurcclarkei, a Cretaceous period herbivorous dinosaur named after science fiction author Arthur C. Clarke, who once said that in the future all people will be vegetarians.

Sylvilagus palustris hefneri, a rabbit named after Playboy founder Hugh Hefner. (The Fish and Wildlife Service lists it as endangered.)