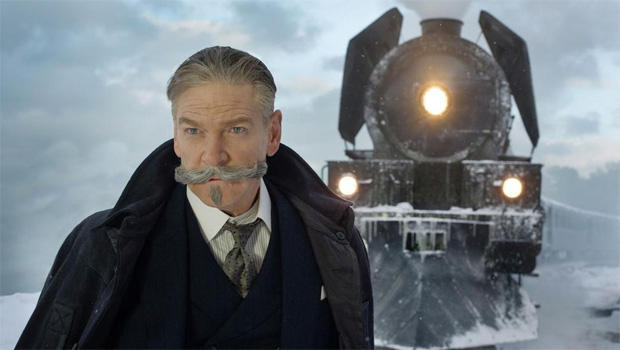 The Sidney Lumet movie "Murder on the Orient Express" was a huge hit back in 1974. This morning, with Seth Doane as conductor, we have a ticket to a remake:

Whether it's the baby grand piano, white table-cloths and fine china, or the art-deco details, it's clear this is no ordinary train. It's the Venice-Simplon Orient Express, made up of historic 1920s carriages reminiscent of the legendary train dating back to the 1800s, which transported passengers between Paris and Istanbul in very high style.

"It is incredible," said James Pritchard. If his name is not recognizable, his great-grandmother's certainly is: Agatha Christie.

"I probably feel as close to my great-grandmother at this point as I ever have," Pritchard said. "You can feel what she must've felt. You do feel a sense of history here."

An avid traveler, Christie was a regular on the Orient Express, which she called "the train of her dreams."

No wonder it was the setting for her most famous tale of murder.

Pritchard said, "I think when you walk along these carriages you can imagine the way her mind worked, as presumably she lay there at night and kind of thought about how someone might die in one of these carriages and then how it might all pan out. You can kind of see how her imagination developed."

Christie's imagination and ability to paint pictures through words pours onto the pages of her 66 novels, 150+ short stories, and more than 20 plays.

Perhaps none is more beloved than "Murder on the Orient Express." It's been told and re-told several times. Kenneth Branagh directs and stars in the latest film adaptation.

"She's such a master at laying out, in this case, very, very fascinating, interesting group of characters," Branagh said.

That made Branagh's job of directing and casting the film all the more interesting.

He may be a towering figure in Hollywood, but he was dwarfed next to the hulking train he had built for his film. "We want it very much to be away from friendly trains, you know, the world of Thomas the Tank Engine and all the rest of it," Branagh said.

At a movie studio lot outside London, he took Doane on board.

To watch a behind-the-scenes featurette on the making of "Murder on the Orient Express" click on the video player below.

In his role as the legendary investigator Hercule Poirot, Branagh sports, of course, the trademark mustache. "One of the most difficult things about popping behind the camera was, literally, sometimes getting the mustache caught in bits of the, what was holding up the eyepiece," he laughed. "So that provided a few unfortunate moments."

There was a fair share of "mustache maintenance" on set, not to mention some wrangling of the all-star cast.

"Agatha Christie loved that kind of performance magic," Branagh said. "So, she absolutely invites you to get an elite team. And if you get that elite team, which we had here, you see them coming at this material, understanding all the subtle ways in which they can make an impression with the character."

He calls his actors "thoroughbreds."  "There's nothing that I can say to Penelope Cruz, Johnny Depp, Michelle Pfeiffer, Judi Dench that they haven't absorbed in a million different ways. So, when you see them arrive on the set, there is a certainty and an assurance which is very thrilling to see."

He says it was also interesting to watch them watching each other. "On the first day they all worked together, it was like the first day of school -- "

"Why would they be nervous? Because they were so impressed by the other?"

"Maybe, unless you're Judi Dench? She might be able to get away with anything?"

"Yes, she was kind of 'den mother,'" Branagh said.

James Pritchard was on set to make sure the original spirit of Christie's writing was protected. "To go on the set of a proper Hollywood movie, it just takes your breath away."

He sees his great-grandmother as a trailblazer. She reportedly sold more than two billion books … a number believed to be surpassed only by Shakespeare and the Bible.

And in an era when women had limited options, she long saw writing as more of a hobby:

"I wrote things, yes, books and stories. They were published. And I was beginning to accustom myself to the fact that I could count upon them as a definite source of income. But never when I was filling in a form and came the line of Occupation, it would never have occurred to me to fill it in with anything but the time-honored 'married woman.'"

But a writer is what she was.

At the rather refined bar on board, Pritchard showed Doane copies of some of the notes Christie penned in the 1920s while riding the Orient Express, detailing fellow travelers: "'An old gentleman of 85 with the most amusing wife of 70 with a hideous but very attractive face.' I mean, I think that last description is just extraordinary."

For those riding the train today, people like Samantha Collins from Dover, it seems Christie remains a silent fellow-passenger. Collins told Doane the atmosphere evoked that of the book. "I've always been a fan of Agatha Christie. I've read all of her books."

Another passenger, Amy Pohl, traveled from Alaska to celebrate her 20th wedding anniversary here. She's read all of Christie's books. And she's been thinking about making this journey for 57 years: "Yes, since I first read the book."

We kept hearing that that Christie's stories were timeless classics, which Kenneth Branagh said demand to be told, and told again:

"With someone like Agatha Christie, the longevity is to do with the innate quality of the original material. And it seems to me, her genius is not confined to one telling of the story."

A genius for murder that never seems to go out of style.

To watch the trailer for "Murder on the Orient Express," click on the video player below.