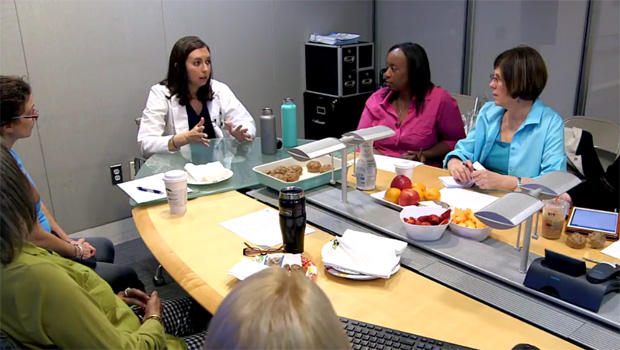 A new study of multiple sclerosis patients examines how a strict diet may ease the symptoms of the disease.

MS, a potentially disabling disease of the central nervous system, affects about 400,000 people in the U.S., and is two to three times more common among women. Current treatments may have severe side effects, and there is no cure.

A cutting-edge, but low-tech attempt to slow the symptoms involves the diet and the microbiome -- bacteria that live mostly in our digestive tract, unique to us as a fingerprint. Research now underway at New York's Mount Sinai Hospital is studying how food might be used as medicine to combat the disease, reports Dr. Tara Narula.

Once a month this pioneering group of MS patients meets to get tips from a nutritionist and share their temptations.

"I was craving a hamburger something terrible the other night," said one patient.

"They had lobster crepes, and there was just no way I was gonna pass that off!" laughed another.

Neurologist Ilana Katz Sand is leading one of the first clinical trials to study the link between what we eat, gut bacteria, and MS symptoms.

"The gut is actually kind of a natural place to look," Dr. Katz Sand said. "And that's because the immune system, about 70 percent of it, lives inside the gut, and has far-reaching implications throughout the rest of the body."

In MS, inflammation occurs when immune cells attack the brain and spinal cord. This study is testing whether a dietary intervention can re-program the immune system to slow down the assault on itself.

Kerane Providence, and the other patients enrolled in the trial, are following a strict Mediterranean-style diet -- no processed food, dairy or meat, but lots of fruits, vegetables and whole grains. Dr. Katz Sand chose that type of diet because those foods are believed to be anti-inflammatory and neuroprotective.

Symptoms, like fatigue, difficulty walking, vision problems and cognitive changes, can be severe and disabling, and can take a heavy toll on patients.

"I was really fearful because I have a family, I have my children, I have my husband," said Providence. "I felt as if my life would just be over."

With the help of medication, Providence is still able to work nights as an oncology nurse -- four years after her diagnosis.

For her, sticking to the diet is a small sacrifice for better health. "No chocolate chip cookies, no dairy, no vanilla ice cream that I love so much," she said. "But if I can participate in a diet that can change my life, give me longevity, give me a piece of how I was before, I don't mind."

This is a small study of about 30. It will be six months before researchers know if the diet has any measurable impact on MS symptoms, though some in the group already report more energy.

Famous roller coaster to close after 36 years of thrills
Thanks for reading CBS NEWS.
Create your free account or log in
for more features.
View CBS News In
CBS News App Open
Chrome Safari Continue
Be the first to know
Get browser notifications for breaking news, live events, and exclusive reporting.