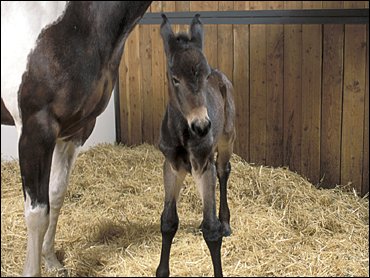 A healthy and energetic mule named Idaho Gem is the first member of the horse family to be cloned, joining the barnyard of cloned animals that now includes sheep, cows, pigs, cats and rodents.

Researchers at the University of Idaho cloned the mule using a cell from a mule fetus and an egg from a horse. Idaho Gem is the genetic brother of Taz, a champion racing mule, and the researchers said the clone mules also will be trained to race.

The cloning was particularly unusual because mules — the hybrid from a donkey and a horse — are almost without exception sterile and unable to produce their own young.

"A mule can't do it himself, so we thought we would give it a hand," said Gordon L. Woods of the University of Idaho, the leader of the mule cloning team.

Now, said Woods, he plans to use the same techniques that worked on Idaho Gem to clone horses.

"We think the same sort of advances that we had to make to produce this cloned mule are important for cloning horses," said Woods. He is first author of a report appearing Friday in the journal Science.

Other researchers, however, said they expect the birth this summer of cloned horses produced by techniques slightly different from that used by the Idaho team.

Mules are bred by mating a male donkey with a female horse. The breeding success is about the same as among horses alone. Mating a male horse with a female donkey produces an animal called a hinnie. Both mules and hinnies can be either male or female, but they are almost invariably sterile.

Taz, Idaho Gem's brother, is a champion on the mule racing circuit in California and Nevada. Taz has gained fame in showdown races with another mule, Black Ruby, who has dominated the circuit.

To clone the racing mule's brother, researchers bred Taz's parents, a jack donkey and a horse mare, and allowed the resulting fetus to grow for 45 days. This provided the DNA needed for the clone.

The researchers then harvested eggs from horse mares. After removing the nucleus from each egg, the researchers inserted the DNA from the male fetal cells. The eggs were then placed into the wombs of female horses.

Out of 307 attempts, there were 21 pregnancies and three carried to full term. Idaho Gem was born on May 4 and Woods said identical brothers will be born in June and August.

"Our first goal was to clone an equine, but I have a special interest in mules," said Jacklin, who is president of the American Mule Racing Association.

Since mules generally are sterile, racing mule owners cannot breed new animals from proven race stock to build up their stable as do thoroughbred and quarter horse owners. Mule cloning could offer an answer.

For that reason, said Kate Snider of the American Mule Racing Association, "cloning a brother to Taz is a very big deal."

Contrary to textbooks, mules are not always sterile, said Leah Patton, an executive with the American Donkey and Mule Society, a Lewisville, Texas, group that keeps a formal registry of mules and donkeys.

"There have been about 50 recorded cases in the past 200 years," said Patton. "It is very, very rare, but there have been some cases where it has been genetically proven that a mare mule has given birth after being covered by a jack or a stallion."

Patton said her organization has registered 3,000 mules in the United States and she estimates that there may be 10 times that number of unregistered animals.

Woods said to clone the mule, he and his researchers bathed the horse eggs in different concentrations of calcium. He said the calcium ratio that has been used for cloning other mammals produced only two pregnancies out of 132 attempts and no births. Higher calcium concentrations had better luck, leading to Idaho Gem and two other full term pregnancies.

Also, unlike other researchers, the Idaho team placed the manipulated eggs into the womb without allowing the embryo to grow in a laboratory dish.

"This is the first cloned equine, so it is a very important advance," said Katrin Hinrichs, a professor at Texas A&M and the leader of a group of horse cloning researchers.

"What is encouraging about this Idaho report is that the foal was born normally and had no problems," said Hinrichs. "That seems to be species specific. Some species, such as cattle, seem to have problems with cloning."

Hinrichs said the result was particularly encouraging because her team is also attempting to clone an equine.

She said they used a technique different from Woods, allowing the cloned embryo to grow to a later stage in development before implanting in the womb. Hinrichs said that out of five manipulated eggs, her team has produced one long-term pregnancy and expect a mare to give birth to a cloned horse in November.

Hinrichs said she has been told that another group of researchers may clone a horse even sooner. A mare carrying a cloned fetus is expected to deliver in Italy this summer, she said.