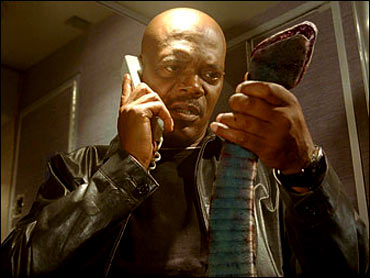 This column was written by Louis Wittig.

There's almost nothing you need to know about the movie "Snakes on a Plane" that you didn't get from the title. Samuel L. Jackson gets on a trans-Pacific flight. A few hundred poisonous snakes get loose in the cabin. Samuel L. Jackson handles it in a way that Richard Gere probably wouldn't have. The end.

Aside from reinforcing the rule against disabling lavatory smoke detectors (pull it out of the wall and bam, the rattlesnake flies right out of the empty outlet) "Snakes on a Plane" doesn't contain any enduring life lessons. However, hidden like a cottonmouth in an overhead storage bin, SoaP is a little parable about why the much-hyped left-wing blogosphere has turned out to be a less potent political force than it might be.

Since Howard Dean's 2004 primary sprint, Web sites such as MyDD, Democratic Underground, and Daily Kos have been exalted by as a new and powerful phenomenon, capable of spinning liberal frustration into cash, volunteers, and excitement for Democratic candidates nationwide. The left-wing blogosphere has declared itself the "netroots" and proclaimed a new era of "people powered politics." The Democratic establishment has reluctantly ratified their self-image.

SoaP was, until last week, an internet phenomenon too. An online publicity brushfire was sparked when screenwriter Josh Friedman referenced the movie in an August 2005 blog post. Fueled by of high camp, SoaP quickly engulfed the Web. Fan sites sprouted up months before there was anything to be a fan of. Video parodies and SoaP raps appeared on YouTube. Blogs went wild. Cable outlets picked up on the fanatical whimsy, which sent the uninitiated scrambling for their computers, spraying gasoline on the whole thing.

New Line, the studio behind SoaP, ran with this rush, sponsoring online, fan-centric competitions and promotions and forgoing the customary advance screenings for critics. In an unprecedented move, New Line went so far as to re-shoot several scenes after initial filming had wrapped in order to satisfy fans' growing expectations. In the process, filmmakers picked up a dialog fragment that had emerged from frenzied web satires (the part where Jackson declares he's "had it with these motherfu**ing snakes on this mother**cking plane!") and wrote it into the final cut. If one day the dictionary contains an entry for people-powered, netroots filmmaking, there will be a picture oftwo rattlers curled around a fuselage next to it.

Then, just as the buzz had built do a dull roar, all went quiet. The weekend box office numbers came back in and SoaP's big debut pulled in $15.2 million, in line with what a hokey thriller without any Web buzz might have made.

For all the donations and volunteers it may generate, the left-wing blogosphere essentially performs the same function as the SoaP blogosphere. "We're really a buzz machine," Markos Moulitsas told "Nightline" in June.

Liberal Web buzz isn't any more effective than the kind about snakes. Only three of the 17 candidates which Daily Kos endorsed in 2004 won their respective races. The online attention does excite committed liberal activists. Netroots hero Ned Lamont upset Joe Lieberman by four points in the recent Connecticut Democratic primary. However, that doesn't seem to translate well to the broader audience. A July 20 Quinnipiac poll has newly-Independent Lieberman leading Lamont by 12 points.

The problem is that most people, both insiders and outsiders, misunderstand the Internet's advantages and limitations.

We look at the humming activity of the blogosphere and assume the cadre of online enthusiasts behind it constitutes the tip of an off-line iceberg. It is assumed that for every posting on MyDD, or SoaP rap on YouTube, there must be dozens of people out there itching for impeachment of python gags.

Reality is just the opposite. People go to the blogosphere because they can't find a sizable number of people in their everyday, off-line lives that are as enthusiastic as they are. The blogosphere gathers together atypical fans and brings them together in what quickly becomes a broadband echo chamber. The louder and more intense the online community gets, the farther it's likely drifting from what is happening offline.

Of course there are differences: the left-wing blogosphere is sincere, the SoaP blogosphere was mostly just having fun with a goof. The same process is at work though, and both produce the same, melancholy and defiant responses when reality, in the form of polls or box office receipts, illustrates just how out of synch they are.

In that same ABC interview, Moulitsas defended the apparent inefficacy of the left-wing blogosphere in getting Democrats elected by saying that its goal all along had not been to win, but to make Republicans play defense. Thus, when Tom DeLay won his 2004 race, it was still a victory for the blogosphere's attempt to build buzz for his opponent, because DeLay didn't win by as much as he might have.

After the opening weekend numbers came out, a disappointed SoaP fan wrote on one blog, "I say this to all the naysayers out there . . . if it weren't for all the fan hype, would this movie . . . even [have been] made?"