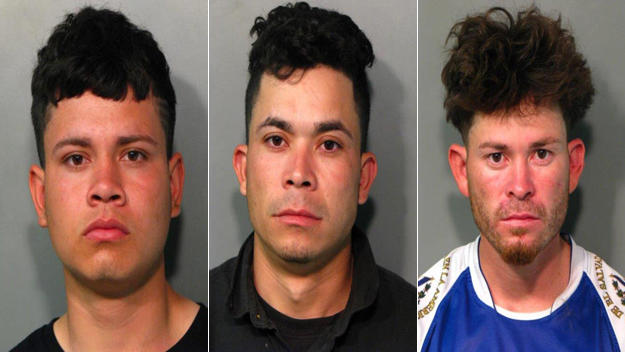 WESTBURY, N.Y. -- Police on Long Island say three members of the MS-13 gang have been charged with attempted murder.

Nassau County police said Wednesday that the victim was slashed with a machete and shot at on Sunday in Westbury, New York.

The violence erupted roughly 20 miles from Brentwood and Central Islip, where MS-13 has been linked to 11 corpses found since the start of the school year. Brutal crimes linked to the gang have captured headlines across the country, and the FBI says violence is a "way of life" for MS-13.

READ: "No regard for human life:" Mounting alarm over MS-13

The two then fled with Arguenta, who was at the scene, police say. They were all born in El Salvador and are allegedly in the country illegally, reports CBS New York.

Police say Jose and Fidel Hernandez are also responsible for a separate assault in Westbury in January.

"All three have demonstrated that they are extremely dangerous people," Nassau County Police Chief Kevin Smith told the station. "We would encourage anyone else who has been victimized or is afraid of these people, maybe afraid to report it, to come forward and contact the police."

Federal prosecutors believe MS-13 has about 10,000 members across the U.S., primarily immigrants from Central America. Headquartered in El Salvador, the transnational gang also has about 30,000 members abroad, Sessions said. FBI officials tell Crimesider they've noticed an increase in the gang's recruitment of primarily children and teens in the U.S. in the past five or six years.