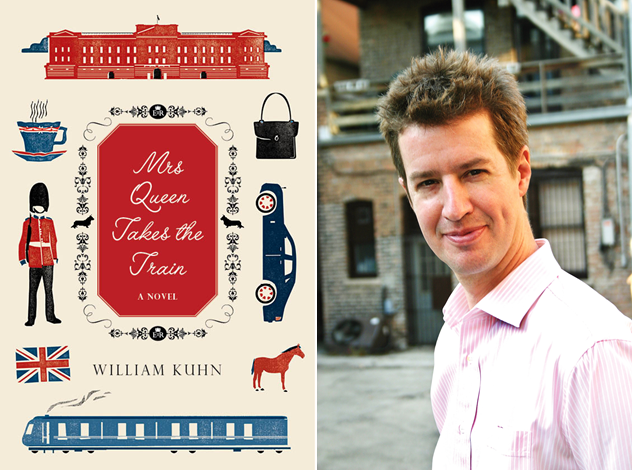 William Kuhn: My previous books on the history of the Victorian monarchy gave me the idea for "Mrs Queen Takes the Train." I worked at the Royal Archives in Windsor Castle. I could never get over the way contemporary life swirled around inside this medieval building. The Queen's ladies-in-waiting arrived driving dented economy cars. The guards wearing scarlet uniforms asked me to sponsor them for their charity runs. I couldn't believe the noise inside the Round Tower when planes from Heathrow flew over. How does the Queen sleep through all this racket I wondered. Wouldn't it be fun to imagine a story about the modern monarchy, the current Queen, and the people who work for her, using what I know from having spent a few months inside a royal residence? That's how it started.

WK: How much easier it is to write a novel than it is writing nonfiction. There are no footnotes.

WK: I would love to be a butler. I don't think people appreciate how much art goes into good service. I think I'd look good in a short black jacket, too.

WK: I have a weakness for difficult women wearing interesting clothes. I'm reading a biography of Lillian Hellman by a Columbia historian, Alice Kessler Harris, called "A Difficult Woman." There are also several new books and a documentary coming out on one-time Vogue editor, Diana Vreeland. I'm reading an advance copy of a new Vreeland biography by Amanda McKenzie Smith.

WK: I'm working on a book about Lord Byron for young adults. All the most interesting things in his life happened to him when he was young: he became a lord, inherited a spooky castle, fell in love, took a bear with him to college, and published a first book of poems that got him into trouble, all before he was out of his teens.

I'm also interested in the 1990 theft when canvases by Vermeer, Rembrandt, Degas, and Manet walked out of the Isabella Stewart Gardner Museum in Boston. The case is still unsolved today. In my new novel, the ghosts of Isabella Gardner and John Singer Sargent return from the dead, disguised as homeless people, to track down the thieves. Mrs Gardner is a pretty angry ghost, so watch out for her.

For more on "Mrs. Queen Takes the Train," visit the Harper Collins website.