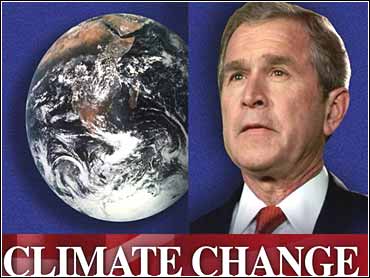 President George W. Bush is proposing an array of tax incentives to encourage businesses, farmers and individuals to reduce pollution as an alternative to an international global warming accord he said would hurt the U.S. economy.

The European Commission tentatively welcomed Mr. Bush's policy announcement, but it said the Kyoto treaty was still the best response to global warming.

"It is positive that the U.S. administration is realizing that there needs to be something done Â… but we feel that the multilateral approach is the best way to face up to this tremendous challenge," EU Commission spokeswoman Pia Ahrenkilde-Hansen said.

Mr. Bush has said the treaty, which has not been ratified by the Senate, could cost millions of American jobs. The pact commits industrial nations to roll back greenhouse gas emissions to 1990 levels.

Instead, Mr. Bush is seeking to draw more businesses into a "registry" of companies that report their greenhouse gas output to the government. They then could trade newly created credits with each other, much as they can under Clean Air Act provisions aimed at curbing acid rain.

Currently, just 222 companies, mostly electric utilities, register and report. The Bush administration does not have a firm goal for how many businesses it seeks to attract to the program.

One incentive to join would be a guarantee that businesses could use the credits in any future system. In addition, Mr. Bush said the government in 2012 would re-evaluate its success in cutting greenhouse gases and consider a new, possibly tougher system.

Mr. Bush says that maintaining and improving about 80 other programs can also help slow greenhouse gas emissions. Through tax incentives, he would urge farmers to plant carbon dioxide-absorbing trees, consumers to buy hybrid and fuel-cell cars and solar hot water heaters and industry to capture methane, a potent greenhouse gas, from landfills.

Dan Becker, a spokesman for the Sierra Club, said linking greenhouse gas output with economic activity would be "nibbling around the edges" of the issue.

"This is a series of voluntary steps that are linked to the health of the economy in a way that makes America a fair-weather friend of the global climate," Becker said. "When the economy is booming, we'll do something modest; when it isn't, we'll dump global warming over the side."

Under his proposed plan, Mr. Bush would also use tax breaks to encourage wind and "biomass" energy generation, in which burning grass, trees and waste produces electricity.

The president's proposed budget allocates $4.5 billion for global climate change-related activities, a figure the administration said would represent an increase of $700 million.

The administration is setting a goal of cutting by 18 percent a statistic that compares greenhouse gas emissions with gross domestic roduct. That measure fell by an average of 1.6 percent a year during the past 10 years, according to the government's Energy Information Administration.

The Environmental Defense Fund dismissed the 18 percent goal, saying it guaranteed greenhouse gas emissions would grow as long as the economy did. A preponderance of scientific evidence suggests that gas emissions, particularly carbon dioxide from the burning of fossil fuels, trap heat in the Earth's atmosphere, risking climatic change.

In a separate effort, Mr. Bush also seeks an "unprecedented" reduction in power plant emissions of sulfur dioxide, nitrogen oxide and mercury, which the administration called the worst air pollutants.

This would be a "cap-and-trade" program in which the government would set mandatory ceilings on total industry output, and let companies earn and trade credits.

The president steered clear of regulating power plants' output of carbon dioxide, the most prevalent of the greenhouse gases. Mr. Bush had promised during his presidential campaign to regulate carbon dioxide from power plants, but reversed himself last year.

©MMII, CBS Worldwide Inc. All Rights Reserved. This material may not be published, broadcast, rewritten, or redistributed. The Associated Press and Reuters Limited contributed to this report