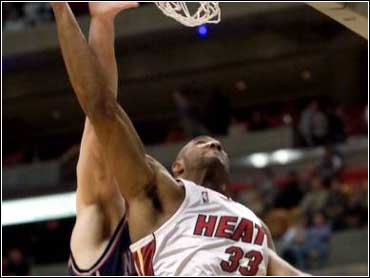 Nothing could stop Alonzo Mourning on Wednesday night, certainly not a broken nose.

Mourning, whose nose was broken Monday night, hit his first 13 shots and missed only one for the game, scoring 43 points as Miami beat the New Jersey Nets 99-85.

Mourning was 13-of-13 before missing a 15-foot turnaround jumper with 56.8 seconds remaining. He finished five off Wilt Chamberlain's NBA record of 18-of-18 against Baltimore in 1967. Mourning's string of baskets ranks fifth in NBA history.

"Alonzo was absolutely awesome tonight," Heat coach Pat Riley said. "He was committed and focused from the start."

Mourning, injured when he was struck by Michael Curry's elbow in a loss at Detroit, also made 17-of-24 free throws and had 16 rebounds and five blocks in 33 minutes.

"I wasn't paying attention to it at all," Mourning said of the chance for perfection. "My intentions were to try to get to the basket and fortunately my teammates gave me the ball in the right spots."

The All-Star center, who has had three facial injuries the past three seasons, had his nose reset Tuesday. He protected it with a bandage instead of a mask.

"That's the best performance I've seen in a long time," the Nets' Kendall Gill said. "I thought Shaq was awesome last night but Zo did Shaq one better tonight."

Shaquille O'Neal had 35 points on 15-of-26 shooting and 13 rebounds in the Los Angeles Lakers' 97-89 victory over New Jersey on Tuesday night.

The Heat, coming off a 1-3 road trip, won their seventh straight home game. Miami earned its first victory over the Nets in three games this season.

"He came into the game with the mindset to dominate," Van Horn said. "We've beaten them twice. He went into the game as if he would be the deciding factor and he established that right from the beginning."

Miami trailed 33-31 when its reserves, led by Otis Thorpe, Clarence Weatherspoon and Anthony Carter, sparked a 14-4 run. Weatherspoon made his first five shots, finishing with 14 points on 7-of-9 shooting.

The Heat maintained at least an eight-point lead for the rest of the game.

Following Marbury's putback, the Nets trailed 92-83 with 4:43 remaining. Mourning, who sat out for 4:40 of the fourth quarter, responded with a 17-foot turnaround jumper.

Mourning's dunk and ensuing free throw made it 99-85 with 1:25 left. "He's one of the best players ever right now in the league," said Evan Eschmeyer, who had five fouls in eight minutes trying to contain Mourning. "He was on fire and I played horrible. He kicked my butt from the start to finish."

Mourning scored 24 points on 6-of-6 shooting from the field in the first half to help Miami take a 59-51 lead.