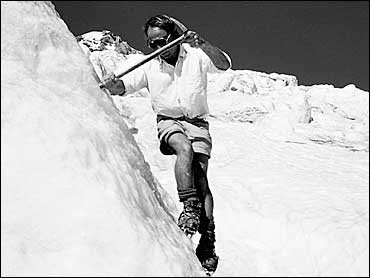 Yvon Chouinard founded Patagonia to make clothes for outdoor athletes. Today they company is a $250 million a-year family-owned business that adheres to an unorthodox philosophy.

Chouinard didn't get where he is without taking more than a few risks. He now runs Patagonia, the company he launched more than 50 years ago in Ventura, Calif., according to very atypical rules.

Chouinard's business put clothes on the backs of people who like to be outdoors: rock climbers, skiers and surfers. Although weekend warriors are a big part of Patagonia's market, Chouinard got into the business because of his own desire to reach the top — the top of a mountain, that is.

Eight thousand miles from the sun and surf of California, far away on the southern tip of Argentina, lies a wild land called Patagonia, the company's namesake.

In the 1950s and '60s, Chouinard pioneered techniques and equipment for rock and ice climbing. He got by on pennies a day — once subsisting on a case of expired cat food — while making legendary ascents, from California's Yosemite all the way to Patagonia.

When Chouinard couldn't buy gear adequate for his needs, he did the only logical thing: he began making it. Starting with climbing tools and later graduating into clothing, Chouinard has always been his own best customer.

"I was a craftsman," he told Sunday Morning correspondent Serena Altschul while banging away in his blacksmith shop. "And I just wanted to make pitons for myself and for friends. And it got to be, you know, friends of friends, and just got out of control. I became a businessman. But I never, never intended that to happen."

Chouinard often calls himself "a reluctant businessman." It's the subtitle of his memoir, "Let My People Go Surfing," which spells out his management style. To him, "MBA" doesn't stand for "Master of Business Administration," but "Managing By Absence."

"I really believe that if — if you're a good manager, you don't stand over your people, you just give them a general direction and you leave them alone," he said. "And that's what I do."

When the surf's up, you won't find Chouinard behind a desk. And he doesn't hog all the fun for himself. Patagonia has a company policy that if the surf is good during work hours and an employee is a serious surfer, he can go.

"It's like, there's no waves today," he said. "You go surfing when there's surf. I don't care when you get your work done, as long as it gets done."

Apparently, it does. The company has more than 1,200 employees. And from the design of its catalogues, which feature customer photos of themselves in the wild, to the design of the latest jacket, Chouinard's philosophy is present throughout.

Duncan Ferguson has run field testing for Patagonia for 20 years. He and pro surfer Keith Malloy put products through their paces before they hit the shelves. Ferguson says Patagonia designs products for the top-end athlete — "the crucible," as he called it.

"If you talk to most people here at Patagonia and ask them why they are here, they would tell you the philosophy of Patagonia," Ferguson said. "So, people that are here 'get it,' understand it — it makes a lot of sense to them and that's why they're here."

A big part of that philosophy involves protecting the places where they love to play. Chouinard is the founder of 1% for the Planet, a group of businesses that donate at least 1 percent of their annual net revenue to environmental organizations worldwide. He's attracted hundreds of other companies to follow suit — and made some friends in high places along the way.

NBC News anchor Tom Brokaw is one of many people who've followed Chouinard's pied piper call into the mountains.

"We go to the Trans-Siberian Plateau," Brokaw said. "We go to Patagonia. We go kayaking in the Russian Far East. We go test our skills a little bit. It's not about golfing."

They call themselves "the do-boys" because they go and do things — they've been friends and adventure companions for years. But Brokaw admires Chouinard for more than just his skills.

But even Chouinard admits, that wasn't always the case. Throughout the 1980s, Patagonia eagerly pursued rapid growth. The 1990s brought along a recession, causing losses for the company and an about-face for its founder.

"We had been growing 50 percent a year, every year, and we were strung out financially. And suddenly — you know, we were ramped up for more growth, and it didn't happen," Chouinard said. "And so we got in financial trouble. And that's when I decided to re-look at all our values and see, 'Why are we in business? And what are we trying to do here?'"

Chouinard first answered those questions by offering customers fewer choices and even suggesting they buy fewer of his products. He then set out to reduce the environmental impact of his clothes. The result: sweaters made of recycled soda bottles and T-shirts made of organic cotton. Conventional wisdom says fewer choices plus the higher costs of green materials would have been bad for the bottom line. Not so, says Chouinard.

"I'm finding out that every time we make the right decision for the environment, that it ends up being more profitable — every single time," Chouinard said. "And whether it's controlling our waste or deciding to use organically grown cotton, or hemp or … it makes us a different company, it distances us from the competition. Patagonia's been around for 30-something years and we're still doing fine. Hopefully, we'll be here 100 years from now."

He recently brought that message to several hundred business leaders assembled in San Francisco by inc. Magazine. In fact, Chouinard says he's had offers in the half-billion dollar range for Patagonia. His answer: No deal.

"What would I do with it, except give it away?" he said. "That's what I do. I don't have a bank account. I have a checking account. I don't buy stocks. I give most of my salary away. I've got everything I want ... you can't bribe me."

He said he never had any desire to go public — that would destroy everything he does and strip him of control. But Chouinard isn't a typical businessman: He'd rather be climbing mountains.