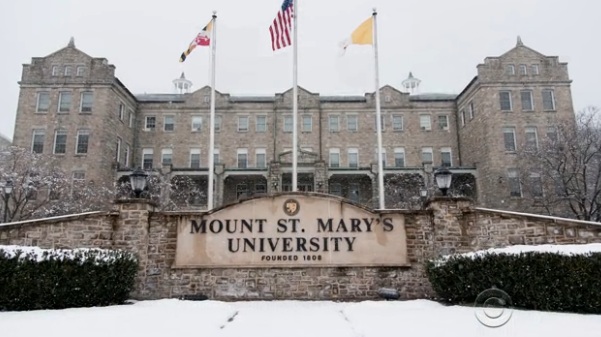 EMMITSBURG, Md. -- The president of a Catholic college in Maryland is rejecting the faculty's demand for his resignation.

The faculty voted overwhelmingly Friday to ask Newman to resign by Monday morning. The request followed an uproar over his plan to boost the student-retention rate by identifying freshman likely to fail and offering tuition refunds for those choosing to leave. Critics said Newman was too focused on eliminating, rather than helping, struggling students.

On Sunday, the student government released results of a student poll indicating 3-to-1 support for Newman. The Student Government Association says 61 percent of undergraduates voted, and 76 percent of them favored Newman's leadership.

Last week, Newman announced he was reinstating two faculty members he fired amid an uproar over a plan to identify freshmen most likely to fail.

They were dismissed last Monday, and the school's provost was demoted, after an investigation into the student newspaper's report that Newman had likened struggling freshman to baby rabbits that should be killed.

Some faculty members resisted and the school paper The Moutain Echo reported that Newman told them: "This is hard for you because you think of the students as cuddly bunnies. But you can't. You just have to drown the bunnies ... put a Glock to their heads."

Many students and faculty were outraged.

"It's not just the words, but it's the plan the words described," Egan told CBS News. "Weeding out students because we think they might not do well in order to make the numbers look better? That's not Mount Saint Mary's."

Egan was the faculty adviser to the school paper and said he's being punished for accurate, but embarrassing reporting by the students. But he said he did not tell them what to write.

"I did not ... no. Anybody on campus who knows the students knows that nobody would manipulate these students," Egan said. "They are independent, strong, bright people."

Egan said he received a letter from a school official which called him "persona non grata" and said he was "not welcome to visit the university's campus" because he violated his "duty of loyalty" to the school.

Newman has apologized for the comment. He says he's committed to mending his relationship with the faculty and wants to "make a new beginning as a unified team."