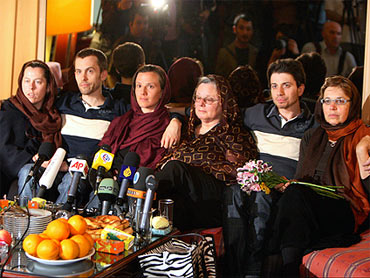 A day after the Iranian government released one of three American hikers imprisoned there for over a year, the mothers of the two remaining prisoners said they are happy and hopeful but it is time for their sons to be freed too.

Laura Fattal and Cindy Hickey, whose sons Josh Fattal and Shane Bauer have been jailed in Tehran for more than 14 months, appeared on CBS' "The Early Show" Wednesday. On Tuesday, Iran freed the third hiker, Sarah Shourd, on $500,000 bail.

(Watch the full interview below)

Shourd is resting in Oman where she was reunited with her mother hours after her release and vowed to dedicate all her efforts to seeing that Fattal and Bauer are freed as well.

Laura Fattal and Cindy Hickey said they had not yet spoken to Shourd or her mother but that they were anxious to do so to hear the latest news about their sons' condition.

"My greatest concern immediately is how hard must it have been for Shane and Sarah to separate and they've become very close to Josh, also," Hickey said, alluding in part to Bauer and Shourd's recent engagement. "The separation of these three must be extremely painful for them."

"They are a unit, a very tight unit," Fattal added. "And I was very happy to hear that Josh and Shane could say goodbye to Sarah and that's a relief because they know that she's free and I'm sure they feel wonderful about that. But, it is, again, their turn, their turn to taste freedom."

Asked what she would say when she does have a chance to speak to Shourd, Hickey replied: "First, I'll tell her I love her and ask her how Shane is. I'll want to hear as much about Shane as possible. You know, they have a wedding to plan. So, we need Shane out, we need josh out so we can move forward with life."

Until then, the mothers vowed to keep fighting.

"We just have to continue on," Hickey said. "I feel stronger, more now than ever, to continue this and just get them release so they can all be with their families."