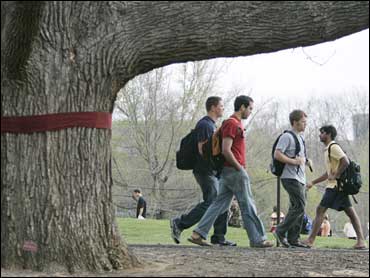 The bikini-clad freshmen are stretched out on colorful beach towels, music blasting from an iPod as they soak up the blazing Virginia sunshine.

Finals at Virginia Tech begin Friday, but like many other students, Dana Comber and Blake Day aren't buried in books.

"Classes seem so unimportant," Day said as she picked at the lawn behind her dorm, just down the road from where Seung-Hui Cho began his shooting spree on April 16. "It seems like all the subjects we were taking are so insignificant."

With the campus still reeling from the rampage that left 33 people dead, the task of studying for exams seems overwhelming. Most students have decided not to take the tests, choosing instead to accept the grades they had before the tragedy.

"I didn't have the mentality to really study and focus," Comber said. "I feel like it's so much more important to spend time with friends and family."

Professors are being flexible, in some cases allowing open-book exams or letting students take the tests from home. Instructors also have the option of dismissing any exam scores that will lower students' final grades. Some have canceled finals altogether.

"Every teacher, every student, every situation can be negotiated differently," university spokesman Mark Owczarski said. "The university wants the students to continue in the learning process and worry less about the grades."

Among those who plan to take the exams, studying has been difficult.

"The general consensus with everyone I've spoken to is just this total inability to focus," said Natoshia Raishevich, a graduate student in psychology who was part of a volunteer group that provided support to students following the killings. "Say it would take you one hour to read something — it might take you three hours" now.

Raishevich, 22, decided to defend her thesis despite being given the option not to. She completed most of the work before the shooting, but preparing for the defense has been challenging. She forgets basic information and struggles to keep her mind from wandering to thoughts of the massacre.

"I really had to refresh myself," she said. "It totally seems like memory loss."

Out of the 70 students in Bradley Hertel's freshman sociology class, only 10 to 15 have indicated they want to take the final.

"Even if they came back thinking they were going to finish the semester, that alternative just didn't resonate once they felt they already had a good grade," Hertel said. "Their minds weren't in it."

Hertel has also struggled, finding it hard to write the exam.

"I've been reeling from this myself," he said. "I've been slow in moving forward on things."

In Marlene Preston's freshman communication skills class, students are traditionally asked to write a reflection essay as their final exam. This year, she said, the essay has taken on a new sense of poignancy — and most students told her they are planning to take part.

Preston hopes the essay gives them structure and a therapeutic outlet for their pain.

"Students were floundering with all the options," she said. "They're having a hard time, and so are we, just managing any work at this point."

"There are certainly some who need to boost their grades," department Chairman Richard Shryock said of students opting to take the finals. "But the ones that are at least in my class, the impression I have is that this is something that they want to do, and that they're determined to try to move forward."

On their beach towels, Comber and Day talk about getting back to everyday activities.

"I just want everything to be normal," Day said. "I honestly wish I was cramming for finals — drinking Red Bull and staying up all night."

Comber suddenly turns up the pair's iPod as DJ Khaled's "We Takin' Over" starts playing. "I love this song!" Day squeals as she rocks back and forth to the beat. Comber looks at her and they start to giggle.

And for a moment, everything seems normal after all.