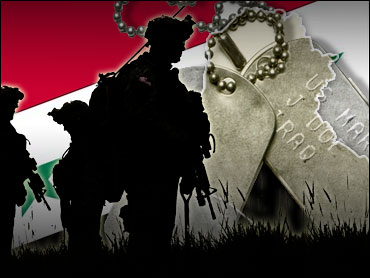 Extremists unleashed a barrage of more than a dozen mortars or rockets into the Green Zone on Tuesday, killing at least three people, including an American, and wounding 18 in an area once considered the safest in the Iraqi capital.

An Iraqi and a "third country national" were also killed in the attack, the U.S. Embassy said in a statement. The embassy said the 18 wounded included five Americans — two military members and three civilian contract employees.

The attack against the well-protected nerve center of the U.S. and Iraqi leadership occurred at a time of mounting opposition to the war in Congress and is likely to cast doubts on claims that the U.S. troop buildup is bringing stability to the Iraqi capital.

Attacks against the Green Zone have increased in recent months, adding to the concern over the safety of key Iraqi and international officials who live and work in the 3.5-square-mile district along the Tigris River in the center of Baghdad. The zone includes the U.S. and British embassies as well as Iraq's parliament and the offices of Prime Minister Nouri al-Maliki.

No group claimed responsibility for Tuesday's barrage, which began after 4 p.m. and sent clouds of white smoke billowing up from inside the Green Zone with each detonation. But some of the fire appeared to have come from the eastern side of the city where the Mahdi Army militia of Shiite cleric Muqtada al-Sadr operates.

At least three loud explosions were heard after midnight from Shiite militia strongholds in eastern Baghdad, but it could not be determined whether military operations were under way there.

Security officials had warned of a heightened security threat against the Green Zone following a series of U.S. military strikes against Shiite militias suspected of ties to Iran. In the latest attack, a joint U.S.-Iraqi force raided parts of Sadr City before dawn Tuesday.

In a report last month, the United Nations office in Baghdad said the "threat of indirect fire" — meaning rockets and mortars — into the Green Zone had increased, adding that the barrages had become "increasingly concentrated and accurate."

The report said such attacks increased from 17 in March to 30 in April and 39 by May 22. Between Feb. 19 and the end of May, at least 26 people were killed in Green Zone attacks, the report said.

There have been several attacks in the Green Zone over the years that have killed more than three people. Most recently, four Asian contract workers for the U.S. government were killed in a rocket attack May 2.

Attacks against the Green Zone have continued despite the Baghdad security crackdown, which began in mid-February. U.S. Ambassador Ryan Crocker and the top military commander Gen. David Petraeus are due to give a preliminary report to Congress this week outlining progress in efforts to improve security here.

The report is due as opposition to the U.S. mission is increasing in Congress, even among President Bush's own party.

Attacks against the zone have also renewed concern about security at the new U.S. Embassy, which is due to open this year within the protected area. The embassy will be the world's largest and most expensive foreign mission, though it may not be large enough or secure enough to cope with the chaos in Iraq.

The sharp increase in mortar attacks prompted the U.S. Embassy on May 3 to issue a strict new order telling all employees to wear flak vests and helmets while in unprotected buildings or whenever they are outside.

Attacks on the Green Zone are nothing new: They have occurred from time to time since the first months of the U.S. presence in Iraq. Often, the rounds landed in open fields, part of a system of parks that Saddam Hussein built when the area served as the headquarters of his regime.

One of the earliest attacks was directed at the Rasheed Hotel, when Deputy Defense Secretary Paul Wolfowitz was staying. He escaped injury but an American soldier was killed and 15 people were wounded.

Two Americans were killed in a rocket attack on the U.S. Embassy on the eve of the Jan. 30, 2005 elections.

But the fact that extremists are able to mount such attacks despite the American troop surge has been especially disturbing.

In one of the most startling breaches of Baghdad's ever-tightening security, on April 12, a suicide bomber somehow eluded detection at successive checkpoints and blew himself up in the Iraqi parliament's cafeteria, killing a lawmaker and wounding 22 other people.

Meanwhile Tuesday, at least 46 violent deaths were reported around the country. In Baghdad, police reported finding the bodies of 23 people tortured and slain, presumably by Shiite and Sunni death squads which still operate despite the security crackdown. Sixteen of their bodies were found on the west side of the city, which is more religiously mixed.

The British military said Tuesday warplanes struck the day before in the southern town of al-Majar al-Kabir near the Iranian border, killing three militants suspected of smuggling weapons into Iraq.

The U.S. military said American special operations forces in a raid Sunday captured 12 militants in Baghdad who had broken away from the Mahdi Army and had carried out attacks on U.S. and Iraqi troops.