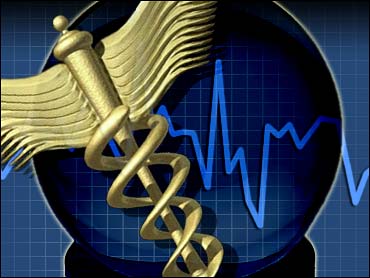 What are your chances of dying within four years?

Researchers have come up with 12 risk factors to try to answer that for people over age 50.

This is one game where you want a low score. Zero to 5 points says your risk of dying in four years is less than 4 percent. With 14 points, your risk rises to 64 percent.

Just being male gives you 2 points. So does having diabetes, being a smoker, and getting pooped trying to walk several blocks.

Points accrue with each four-year increment after age 60.

The test doesn't ask what you eat, but it does ask if you can push a living room chair across the floor.

The quiz is designed "to try to help doctors and families get a firmer sense for what the future may hold," to help plan health care accordingly, says lead author Dr. Sei Lee, a geriatrics researcher at the San Francisco Veterans Affairs Medical Center, who helped develop it.

This test is roughly 81 percent accurate and can give older people a reasonable idea of their survival chances, Lee and his colleagues say.

Of course, it isn't foolproof. Other experts note it ignores family history and it's much less meaningful for those at the young end of the spectrum.

The researchers even warn, Don't try this at home, saying a doctor can help you put things into perspective.

"Even if somebody looks at their numbers and finds they have a 60 percent risk of death, there could be other mitigating factors," said co-author and VA researcher Dr. Kenneth Covinsky.

There are things you can do to improve your chances, he notes, such as quitting smoking or taking up exercise.

The test is based on data involving 11,701 Americans over 50 who took part in a national health survey in 1998. Funded by a grant from the National Institute on Aging, the researchers analyzed participants' outcomes during a four-year follow-up. They based their death-risk survey on the health characteristics that seemed to predict death within four years.

Their report appears in Wednesday's Journal of the American Medical Association.

Dr. Donald Jurivich, geriatrics chief at the University of Illinois at Chicago, took the test and got a nice low score. Jurivich is 52. He said he'd feel better about his score if both his parents hadn't died prematurely.

He praised the survey for measuring people's ability to function
— such as being able to move a piece of furniture or keep track of expenses — signs that can be more telling than other health factors.

Willie Hood Jr., 74, a patient of Jurivich's, pooh-poohed the test "because I don't know when I'm going to die and nobody else" does either.

"My grandmother, they said she wouldn't last the night away, she lived three more years," Hood said.

Dr. George Lange, a 57-year-old internist at Columbia-St. Mary's Hospital in Milwaukee, faulted the test for not measuring blood pressure or cholesterol. Lange got a healthy low score on the test, too, but he's overweight. He was surprised he didn't get points for that.

In fact, that's one of the most puzzling aspects of the test. People with a body-mass index of less than 25 — which includes normal weight people — get a point while those who are overweight aren't penalized.

Covinsky, one of the test designers, said that BMI measurement includes underweight people — those who have lost weight because of illness, a risk factor for the elderly.

As to obesity, Lee noted there are more points for diabetes and for difficulty walking several blocks — both associated with excess weight.

The researchers think their mortality predictor might be a useful tool in the "pay for performance" trend that is part of the nation's health care system. Medicare and other insurers are increasingly basing reimbursement rates on how patients fare, said Covinsky.

"One health plan can look better just by cherry-picking health care patients" and accepting only the most robust patients, Covinsky said. This test could give a more accurate assessment of health plans, he said, so that "you can actually see which ones are taking sicker patients and compare that" when measuring performance.