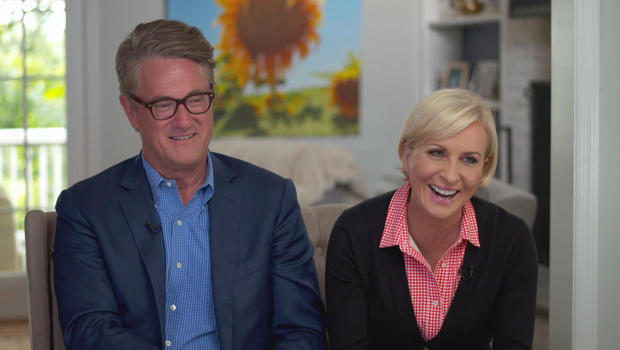 Mika Brzezinski and Joe Scarborough are never at a loss for talking points, as viewers of their long-running talk show well know. This morning they're talking to Lesley Stahl of "60 Minutes":

"We started talking at 5:58," Scarborough recalled, "and we were in the middle of such a great conversation that they were counting us down and I said, 'Keep talking, keep talking, ignore the cameras.'"

Ten years later, they're still talking -- and "Morning Joe" has become a morning jolt of smart political conversation, with many of the nation's most powerful people tuning in, and sitting in. One of those people was Mika's father, the late Zbignew Brzezinski, national security advisor to President Carter, and a frequent guest on "Morning Joe."

There was intrigue from Day One because of chemistry between Joe and Mika, suggesting that they were a secret item.

"Those bumper shots of the two of you, looking like lovers?" asked Stahl.

"Or angry, mad at each other?" he replied.

"Why did you put those sexy bumper shots up if this wasn't in your mind?"

"Or Simon and Garfunkel," Scarborough retorted.

"His glasses are getting fogged up," Mika laughed.

Rumors about Joe and Mika (both married when the show began) heated up. Then, in August of last year, then-presidential candidate Donald Trump added fuel to the fire, tweeting: "Some day, when things calm down, I'll tell the real story of @JoeNBC and his very insecure long-time girlfriend, @morningmika."

"Did you confide in him?" Stahl asked.

"No," replied Scarborough. "Would you confide in him?"

"He always had fun with us," Brzezinski laughed. "And be like, 'Oh, you two. Look at you two. What a beautiful couple.'"

When Stahl tried to find out when the romance began, a wall went up. In May 2017 Brzezinski told Vanity Fair, "Over the past year-and-a-half, I realized I had to face these feelings and that it was time to stop putting them in a box. It was not an easy process and it was not an easy set of decisions for either of us. It was something I couldn't deny anymore."

"So you had the feelings and you were trying to push 'em away, and then couldn't do that anymore?" Stahl asked.

"That pretty much says it," she replied. "I totally understand that I'm being completely difficult, but that's about as far as I'm gonna go."

And then there was the "Saturday Night Live" skit:

"We knew it was a good skit," said Scarborough, "when they're getting closer together, we were covering our eyes and screaming."

"I was sweating," she added.

That was in May. In June, President Trump tweeted about them again, striking back after Brzezinski mocked him: "Nothing makes a man feel better than making a fake cover of a magazine about himself, lying every day and destroying the country," she said. Referencing the fake Time Magazine cover that had been hung at Trump country clubs, Brzezinski added, "He's covering his hands here because they're teensy."

"He really came swinging at Mika -- 'bleeding badly from her facelift,'" said Stahl. "And you were on the air, I saw it, and you were so remarkably restrained. You brushed it off":

"I'm fine. My family brought me up really tough. It's absolutely nothing. But I am very concerned about what this, once again, reveals about the President of the United States."

"I can say the same thing," Scarborough said. "'A racist, a bigot' -- he doesn't take it personally. He takes it personally from Mika."

"But this is the President of the United States, insulting you, trying to embarrass you, after of course you had done that to him?"

"I don't think that I was 'lashing out' at him," Brzezinski replied.

And yet, during the campaign, and long before that, Joe and Mika's relationship with Donald Trump had been friendly. He frequently appeared on "Morning Joe," in person or on the phone. ("I'm speaking with myself, number, one, because I have a very good brain.")

Stahl said, "The impression was made that you legitimized him. I think you even admitted to somebody that you gave him advice?"

"Yeah, you know what my advice was? My advice was, 'Donald, you should apologize to John McCain; he's a war hero,'" Scarborough said. "And finally he said, 'I just don't apologize.'"

Brzezinski added that their advice to Mr. Trump was not "Here's how you could win."

Yet Mr. Trump also referred to both Joe and Mika as his "supporters."

When "Morning Joe" signs off at 9 a.m., Joe and Mika's day is just beginning. On the day Stahl visited the set, Scarborough directed a photo-shoot for Brzezinski's upcoming "Know Your Value" event, before she met with her team to work out the details.

The talks grew out of a book Brzezinski wrote about how she learned to ask for the raise she deserved.

She had found that she was being paid 14 times less than Scarborough, and less than the core team.

When Brzezinski has time to kick back, she heads into her backyard in suburban New York, which she's turned into a chicken coop! In addition to 14 chickens, she has a cat, a dog, rabbits, and two kids.

Stahl asked, "If you have to choose right now between being a politician …"

"I can already answer this, but go ahead," he replied.

"Everything," he said. "Those were all side gigs that paid for my music."

He releases four of his own songs every month, and performs them in New York nightclubs.

To watch Scarborough perform "Welcome to the Monkey House" (from their EP "Mystified") on "The Late Show with Stephen Colbert," click on the video player below.

Stahl asked, "Do you ever regret the path your life has taken?"

"It's hard to regret the life I have lived," he said. "I came from a very sort of middle class background and I wake up every morning at 4 o'clock in the morning, and my first thought is Uugggh, and my second thought immediately is, Wait, I've got a job and I'm doing what I love.

"But if I could do it again, would I throw equipment in the back of the van and drive around the country for a couple of years? Yes."

Last May, on Brzezinski's 50th birthday, Scarborough popped the question, and now they are engaged -- a fairy-tale ending, with a few loose ends still to tie up, like a wedding date.

"Yeah, but I don't want to wait forever," she laughed. "But I'm just trying to figure out logistics and family."

And regards to their six kids, Scarborough said, "They've all gotta be good with it, as far as when and where and everything else."

And the houses? For Scarborough, New Canaan is his paradise: "It's not the chicken coop."

"Mika Scarborough? Is that what you're saying?" Stahl said.

"I might. We'll see," Brzezinski said. "[Lesley] does not approve!"