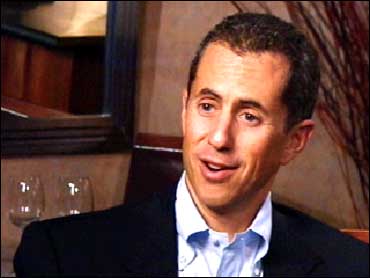 For Danny Meyer, Hog Heaven is Lynchburg, Tenn., where last fall he was a judge in the 14th annual Jack Daniel's barbecue championship.

He doesn't just love how it tastes, he loves how it's cooked and all the paraphernalia involved.

"One of the things I'll be looking for in the judging is the pink smoke ring," says Meyer. "When you've absolutely smoked something properly, you'll see about a quarter of an inch of pink right around the edge."

So who is Danny Meyer and why do we care that he does barbecue like's getting a PH.D in it?

He owns five of New York City's best and most popular restaurants, Tabla, Gramercy Tavern, Union Square Café, Eleven Madison Park and his latest venture, Blue Smoke, which is his take on the barbecue.

You don't have to know him very long before you find out that anything that interests Danny Meyer shows up in one of his restaurants, which have been perennial top picks in just about every New York City tourist guide for years. The Union Square Café was No. 1 in New York's restaurant bible, Zagat's. In the 2003 edition of Zagat's, it got bumped to No. 2, by one of Danny Meyer's other places, Gramercy Tavern. Four of his five restaurants are in Zagat's top 20.

Clearly, he's doing something right. And what he's done right, it turns out, has also helped New York City.

Meyer is credited, almost single-handedly, with the transformation of one of the city's great old historic squares, which had fallen on very hard times.

"This for me is the closest thing we have in New York to a piazza, like they have in Italy," says Meyer. "Where you see people, people you know, who speak to one another."

When he first arrived there, the vegetable market in Union Square was tiny. Today, it's a mecca for New York's most celebrated chefs.

"I never would have established one restaurant in this neighborhood, much less five, had it not been for this market," says Meyer.

It's almost as if, in the middle of Manhattan, Danny Meyer has created for himself a tidy, utopian village, with his five restaurants as its boundaries and the market as its town green.

His love for food started at home, growing up in St. Louis.

"It was really fun to be around the kitchen and smell olive oil and smell what it smelled like when the garlic would hit the olive oil," says Meyer. "My dad and I cooked all the time. My parents spent the first two years of their marriage in France. As a matter of fact, we had a French poodle named Ratatouille, which was certainly an interesting thing to try to explain to my friends in second grade."

At summer camp, he won cooking contests. His father was in the travel business, so trips to Europe were cheap. He roamed around studying food and culture for fun.

"I'll never forget, I kept this incredible journal, which I still have, where I would go into every restaurant I ever went into," he says. "Mostly, it was over a year and a half of time I was spending in Italy, and I would love a light fixture and I would draw it.

"Or I would draw the way the wood looked on the floor in addition, obviously to writing down menu ideas, and I ended up just after a lifetime of being fascinated with eating in restaurants, creating one that would be my favorite restaurant if it only had existed."

That restaurant was the Union Square Café. It was his first, which opened in 1986. Since then, he created his entire universe around what matters to him — starting with his wife Audrey and their four children.

"I put my daughters on the bus every morning at 7:30," says Meyer. "I take my two sons to school two days a week. Audrey takes them the other three days."

Then Danny Meyer walks to work. His office, in the basement of the Gramercy Tavern, is five minutes from his home. So are all his other restaurants.

Once, Meyer thought about going into politics. In a funny way, he did. Everyday, like a small town mayor or the practical businessman he is, he does the circuit. He can be seen with diners in each location. And, he calls them guests, not customers.

He creates an atmosphere of genuine, unfailing hospitality. Meyer says it is the secret of his success. But, the customers don't come first — they come second. His 600 employees come first, Meyer says. When was the last time you heard that?

The staff meal before each shift at his restaurants is called family meal.

Meyer thought he wanted to go into politics because he dreamed about doing some good. But in his invented small town, in the middle of Manhattan, he does a lot of good.

"All of our restaurants care deeply about their communities," says Meyer.

He says his restaurants cook a meal every Wednesday at Beth Israel Hospital to serve the hospital unit's nurses, doctors and to families of dying patients.

For Danny Meyer, the restaurant business is the means to the ends.
He opened 11 Madison Park because, he says, it gave him the opportunity to restore the lobby of one of New York's earliest skyscrapers.

"The restaurant itself becomes a character as powerful as the menu," says Meyer. "The restaurants are leading actors in the play."

Across the street from the Madison Park Kitchen and Tabla, an Indian restaurant, there was another park that was a wreck. So Danny Meyer went to work, again.

"I saw an opportunity to do again what we had helped do in Union Square Park," says Meyer. "To help motivate the neighborhood to become something special."

Again, what was good for Danny Meyer was good for everybody else. On the way to raising $10 million for the park restoration fund, he indulged another of his interests.

Meyer loves hot dogs, so he got his very own hot dog stand in the middle of the park to generate money for the restoration fund.

Which brings us back to barbecue. In Danny Meyer's corner of Manhattan, all the barbecue has to be perfect. Ten months after opening Blue Smoke, he says it isn't there yet.

"My restaurants are never any more than clumsy at the beginning, so I hold my own nose for the first six months," says Meyer. "It's never until the 12-month period that I start to feel proud. At least I start to feel like I don't need to walk into that restaurant and worry if we're letting people down."

But that's about the same time that Danny Meyer probably will be thinking about opening another restaurant.