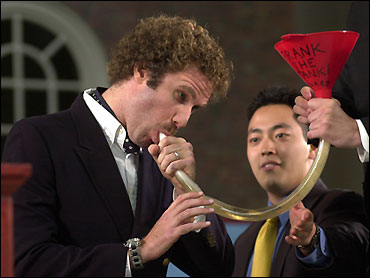 On The Early Show, the Academy Award nominee discusses her new film "Far From Heaven" in which she plays a complex character who confronts the racial and sexual morals in 1950s suburbia.

Inspired by the great Hollywood dramas of the era, the film tells the story of the Whitakers, whose daily existence is characterized by carefully observed etiquette, social events and a desire to keep up with the Joneses. Cathy Whitaker (Julianne Moore) is the housewife, Frank Whitaker (Dennis Quaid) is the breadwinner husband, and Raymond Deagan (Dennis Haysbert) is the widower gardener.

As the story unfolds, boundaries of sexual and racial tolerance are broken.
Cathy finds out her husband is gay and her relationship with Raymond starts to evolve into something less innocent, but is frowned upon due to the difference in race.

At the 2002 Venice International Film Festival, Moore was given the Coppa Volpi Award for her role in "Far from Heaven."

The film is the second teaming of Moore with writer/director Todd Haynes and producer Christine Vachon. The three collaborated on the acclaimed 1995 drama "Safe."