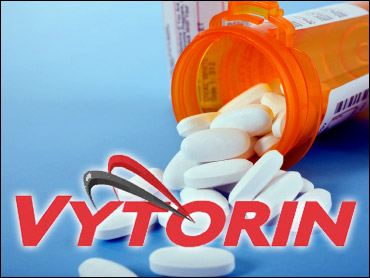 And it looks like Vytorin's problems are coming from two sources as well, CBS News correspondent Susan Koeppen reports.

First, from Capitol Hill, where Congress wants to know why it took the drug-makers Schering-Plough and Merck almost two years to reveal results of a study showing that Vytorin, which combines Zocor with Zetia, is no more effective than Zocor alone.

"The drug from a health point of view, is not what it's advertised," said Rep. Bart Stupak, D-Mich.

Stupak signed and sent letters today to both drugmakers requesting documentation about what they knew and when they knew it - and whether they withheld information to protect their profits.

Vytorin is more expensive than Zocor, which is available generically.

"Schering-Plough and Merck were supposed to provide information by 5 p.m. last night. At 4:50 they dropped off very incomplete files," Stupak said. "We need the information."

The second source of problems comes from inside Shering-Plough itself. Turns out President Carrie Smith Cox sold 900,000 shares of stock worth $28 million last spring. That's after the study was completed, but well before the findings were made public this week.

Both Schering-Plough and Merck told CBS News that they did not find out the results of the study done by outside researchers until two weeks ago.

But the drug-makers had plenty of reasons not to want that information made public - almost half a million prescriptions for Vytorin are written every week.