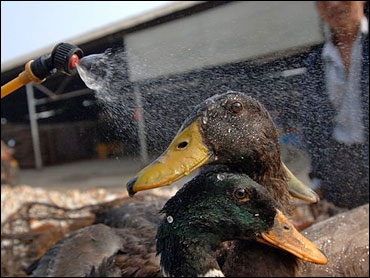 Authorities have detected signs of bird flu at a farm in northern Japan and plan to kill 180,000 chickens, a local official said Friday.

The latest Japanese outbreak occurred at a farm in Ibaraki prefecture (state), 56 miles northeast of Tokyo, according to Yoshiko Otani of the prefectural livestock farming section.

Antibody tests on 80 chickens showed that all had been exposed to a bird flu virus from the H5 family but survived, the prefecture said in a statement. No active bird flu viruses were found.

The chickens were kept in a free-range compound. About 180,000 free-range chickens out of the 300,000 kept at the farm would be killed, Otani said.

Authorities have already culled around 1.5 million birds in Ibaraki after finding signs of the disease at other farms.

Bird flu hit Japan last year for the first time in decades. Officials say the strain that hit the country, H5N2, is less virulent than the H5N1 variety that has ravaged Southeast Asia since 2003 and killed at least 62 people there.

A new report Thursday warned that a flu pandemic could kill 3 million people in Asia, trigger economic carnage in the region worth almost $300 billion and push the world into a recession.

The Asian Development Bank's warning was among several dire scenarios pictured in a report that examined the likely effects on the region if bird flu produces a human pandemic that slashes consumer demand and sickens millions of workers.

In its grimmest scenario, in which the psychological impact of a pandemic lasts one year, the bank said Asia could loss almost $282.7 billion or 6.5 percent of gross domestic product, in consumption, trade and investment and another $14.2 billion due to workers' incapacity and death.

" ... Growth in Asia would virtually stop," the report said.

The scenario assumes about 20 percent of Asia's population would fall ill, and 0.5 percent of them would die.

In a less pessimistic scenario, the bank said that if the psychological impact of an outbreak lasted 6 months, the cost to Asia in lost consumption, trade and investment would be about $99 billion.

China, Hong Kong, Singapore, Malaysia and Thailand would likely be hit hardest by the pandemic, the bank predicted.

In a separate report, also released Thursday, the World Bank said bird flu was already harming several East Asian economies. Costs so far have been limited, around 0.1 percent to 0.2 percent of gross domestic product in Vietnam, but could rise significantly, the bank said.

Milan Brahmbhatt, author of the report, said a human pandemic caused by bird flu could cost the world economy as much as $800 billion.

The reports came as governments stepped up cooperation to prepare a global response to the risk that the bird flu virus that has swept through Asia and entered Europe could mutate into a form transmissible between people and produce a pandemic that could kill millions.

Vietnamese scientists said they were ready to begin testing a new flu vaccine on human volunteers when they receive permission from the government, following an $18 million allocation from Washington this week as part of U.S. preparations for a pandemic.

"Our funds are limited, so the funds from the U.S. are very significant," said Doan Thi Thuy, deputy director of the National Institute of Health and Epidemiology's Vaccine and Biological Products No. 1 Company, where the vaccine is being developed. "We need more money to buy equipment."

Thuy said her company began working on a vaccine last year and tests on chickens and monkeys produced promising results. Scientists are waiting for permission from the Ministry of Health to begin testing on human volunteers.

China and Vietnam have banned poultry imports from countries with outbreaks. Vietnam has suffered more than 40 of the 62 confirmed human deaths from bird flu in Asia since 2003, while China has had three outbreaks in birds in recent weeks but no human cases.

Most of the deaths from bird flu have been linked to close contact with infected birds, but experts fear the deadly H5N1 virus devastating flocks in Asia and pockets of eastern Europe could mutate into a form easily spread from person to person and have called for increased prevention worldwide.